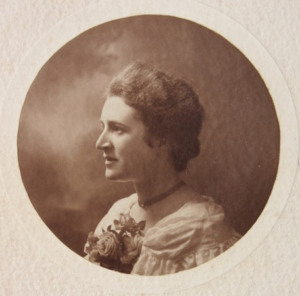 Reproduced on the website by permission of James and Catharine Robertson

No record, but most girls of her class were taught piano and singing at that time

A new work is in progress by Frances M Lynch which will be previewed at Darwins’ home – Down House – on August 12th 2019. If you are a member of English Heritage you can attend the event (details here). If not, then do subscribe to our newsletter and we’ll let you know when it arrives here!

Blue plaque erected in 2018 by English Heritage at 9 Elsworthy Terrace, Primrose Hill, London, NW3 3DR, where she once lived (photo by Spudgun67 on wikimedia commons)

Researching
Arber met the botanist Ethel Sargant at school, who was a major influence on her life. Arber worked in the ‘Jodrell Junior’ lab at Sargant’s home in Reigate during her holidays from school and university, especially on cotyledons.

Teaching
After her degree, she worked at UCL first as a teaching assistant and then as a lecturer. Women formed nearly 80% of the students who won prizes.
In 1909, she left to get married and moved to Cambridge to work with her husband on paleobotany.

Writing
In 1912, she published her most successful book, Herbals, and continued to write after their daughter Muriel was born.
In 1918, her husband and Sargant both died, but she continued to work at home as a single parent. Unlike many working mothers, she had domestic help, and so could continue dedicating herself to her research.

Image from page 184 of ‘Herbals: their origin and evolution’ (photo by Internet Archive Book Images on Flickr)

Botany was Arber’s passion throughout her life, yet she chose three different ways of approaching it.

Despite her stellar qualifications, like many women of that era Arber was marginalised and deprived of conventional career opportunities.
A single parent after her husband died young, she worked in her own laboratory at home and was linked into female scientific networks.
She displayed great adaptability in the face of adverse circumstances, starting her career by studying ancient herbals, then moving into first-class technical research (plant morphology), and finally producing highly-regarded philosophical and historical analyses.