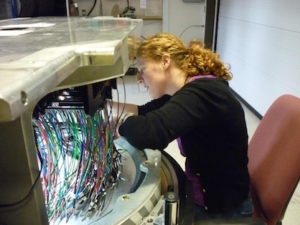 I play the oboe, and I’m quite an active amateur musician! I play in the chamber orchestra and the baroque ensemble of the University of St Andrews, and you can also find me in the orchestra pit for Gilbert and Sullivan performances. I started the Shine project to combine science with music and art, and when Frances Lynch approached me for the Echoes project on Scotland’s Superwomen of Science I did not have to think long before saying yes.

NGC 2974 is my favourite galaxy, as it is the first galaxy that I started working with as a PhD student in Leiden. I published my very first paper, featuring this galaxy in 2008, and now more than 10 years later, my PhD student Meng Yang in St Andrews has picked up this galaxy again to test her new method to map dark matter. So it just seems fitting that in 2019 this galaxy is in the spotlight again, both scientifically and musically!

” …..above the surface of the earth, the noise of the tempest ceases and the thunder is heard no more in those boundless regions, where the heavenly bodies accomplish their periods in eternal and sublime silence” (Mechanism of the Heavens)

“……for aught we know, myriads of bodies may be wandering in space unseen by us, of whose nature we can form no idea, and still less of the part they perform in the economy of the universe.” (On the Connexion of the Physical Sciences)

This piece has Anne-Marie’s voice and a track of the composers group all singing a different note each, going all the way through the track. The idea of this music is to connect people to the stars and get them interested in Astronomy

You will hear the sounds of each galaxy – with beats created from their names, then a collision and the combination of the two galaxies to make an elliptical one.

In high school my favourite subjects were maths, physics and chemistry, so I knew quite early on that I wanted to go into science. When I then discovered you could study astronomy at University I was sold, as this field combines all of these three subjects. I did my undergraduate at Leiden University (combined BSc and MSc), and after graduating, stayed on to continue in astronomy with a PhD.

I started my astronomy career in 2005, when I was hired as Assistent in Opleiding (Dutch version of PhD student) at Leiden Observatory, to map dark matter in nearby galaxies. I’ve been an astronomer ever since!

When I was a student, I was a maths tutor and helped high school students prepare for their exams.

My very first job, in a small seasonal supermarket at a camping site. I still have a small scar from when I accidently walked into a very hot baking tray full of croissants…

I want to understand how galaxies, like our own Milky Way galaxy, form and evolve. I study the movement of stars and gas in galaxies, and use these to better understand the structure of galaxies, and to map the invisible dark matter halo that surrounds them. I work in a large international team of astronomers, using observations of the Sloan Telescope in New Mexico (US). I coordinate the data releases for this team, helping to make sure that everyone has access to the observations so that everyone can work on their science.

I knit, anything from socks to sweaters.

When I teach first year astronomy, I always talk about Henrietta Swan Leavitt. She started her astronomy career as a ‘human computer’, to analyse photographic plates with observations collected at telescopes. She discovered that a certain kind of variable stars called Cepheids could be used to determine accurate distances in the Universe. Her discovery was later on used by astronomers such as Edwin Hubble to show that the faint nebulae observed in the sky were actual galaxies outside our own Milky Way, thereby vastly increasing the size of the known Universe at that time. We still use Cepheids up to this day to determine astronomical distances.