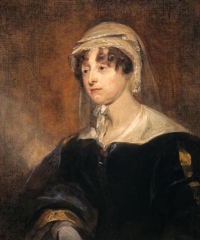 There are no connections to science that we can find… if you know of any then do let us know!

The song is about a mother singing to her child about its missing father – an echo from the life of astronomer WILLIAMINA FLEMING. HELEN HOPEKIRK, like Fleming, was an emigrant from Scotland who settled in Boston at around the same time. It is just possible that one of Mina’s many outings to the theatre might have included a concert given by this famous pianist!  It is even more certain that both Bostonians knew many more of Lady Nairne’s Songs.

This arrangement was used as part of a larger work which reference the lives of the scientists. The slight change in words was to include the family names of siblings.

Carolina was educated at home with her sisters by a governess who followed the Jacobite views of her father, and by the local minister, who seems to have taken a similar line.

Composer
We know that she wrote her own tunes – at the very least for some of her most popular songs eg. “The Rowan Tree” which features in another of our Minerva Scientifica Projects about biologists LAURA FLORENCE and DORIS MACKINNON, and a very popular Jacobite song – “Will Ye No Come Back Again”

Poet
She wrote and collected songs and poems from the Scottish folk tradition – probably about 100 in total – preserving them for the future after cleaning up some of the more baudy texts!  Her songs have often been wrongly attributed (even during her lifetime) to others – particularly Robert Burns, a source of much annoyance to her.

Her work is very much embedded in Scottish culture nowadays, though still often without the correct credits. However, her song “Caller Herrin” appears, with its proper accreditation, on the Eyemouth Disaster Memorial by Jill Watson which featured in our Echoes – Berwickshire Coast project.

Musician
She played harpsichord and could read music.

Baroness
Carolina – after Walter Scott petitioned the King for the return of the Oliphant’s Jacobite titles – became a Baroness and never gave any hint to either her husband or his peers of her artistic endeavours. She was persuaded through a very close friend to write for the Scottish Minstrel publication but under her assumed name.

After her death, her sister published a collection of her poetry and songs entitled Lays of Strathearn in 1846. This would have been the first time people realised she was the author of some of their favourite songs. 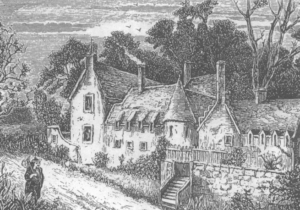 Sketch of the Auld Hoose, Gask, by Carolina Oliphant (from Charles Rogers, The Life and Songs of the Baroness Nairne) 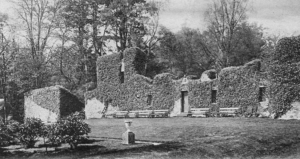 House of Gask, Perthshire, Scotland, in the 20th Century

During her lifetime the 6 volumes of The Scottish Minstrel, published from 1821 – 24, included many of her unacknowledged work, alongside those of many others like Robert Burns. These volumes were pivotal in retaining and enriching the traditional music of Scotland. It seems incredible that her position in society meant she was unwilling to admit to being one of these authors, a secret she kept until her final goodbye.