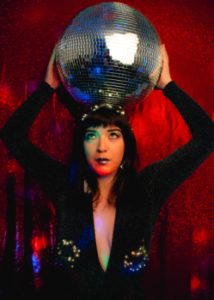 Composed sound design for Anahat Theatre for a short theatre play about the neurobiology of emotions, called “Instructions On How To Cry”, which was performed in the Scottish Storytelling Centre at Edinburgh International Science Festival 2019.

I have performed in 3 separate pieces inspired by the environment, particularly notions of the Anthropocene (or 6th extinction) for Unfix Festival of Performance Art and Ecology at Centre for Contemporary Arts, Glasgow in 2015, 2016 and 2017.

In 2018, I put together a fundraising event for marine conservation charity Sea Shepherd to mark Remembrance Day for Lost Species 2018; musicians, writers and artists were encouraged to create work inspired by extinct/endangered species, which was released as a paper zine and online download. Over 30 people from various creative disciplines were involved.

This was composed partly through using a graphic score, based on various conversations had with Dr Clare Taylor. I was inspired by the humorous “gruesome” fairy tales model of Roald Dahl, and Ivor Cutler as another perspective on how to explain this subject matter to a younger audience. I wanted to implant science within a traditional mythology structure, but being sympathetic to the sheer power of Listeria itself, for its transformations are really quite impressive considering its size and the simplicity of its structure. While Listeria is definitely portrayed as a fearsome microbe, I hoped audiences would feel slightly in awe despite being rightly dubious of ever accidentally being infected by it!

I am a self taught vocalist and musician who always liked singing and had a crazy dream that one day I could do it all the time. My Grannie sang to me a lot when I was a child and encouraged me to do likewise. My mum was learning classical guitar when I was a child, and I was sent for violin lessons although I was awful at practicing. I started teaching myself guitar as a teenager, and found making up songs to be a good way of filling my time and expressing my thoughts. A family friend gave me a cassette tape 4-track, so I started recording songs layered with lots of harmonies since I didn’t really play any other instruments. Later I studied Sitar and Gamelan, and started collecting instruments, building by skills on thesis, and learning more about free improvisation, eventually joining Glasgow improvisers orchestra. My attitude has always been “give it a go”…

Community Musician
I have worked with all kinds of people from all kinds of backgrounds, as I enjoy meeting a variety of people and hearing their stories. We can never become someone other than ourselves, but it is fascinating to encounter other perspectives, and often they think of exciting new ways to approach music-making and playing instruments, perhaps bringing something of their own cultural tradition to it, whether that be beat-boxing or folk. Music is a great connector and I like to connect because that’s the joyful part of being human.

Youth Worker
I really enjoyed spending time with adolescents because they have a cynical sense of wonder at the world, and often really benefit from having a little support to help focus them to work through their thoughts and emotions. It was very fulfilling and fun most of the time, although often throwing up all kinds of moral dilemmas about what to do to best support young people whose circumstances were more difficult, but when you got to see the development of a young person from being shy to feeling more empowered in themselves, it really made it all worth it. I look forward to the day when I see them playing around Scotland, and I hope I managed to help encourage some of them to pursue music seriously.

Activities Coordinator
When I needed a break from being a touring musician, I still wanted to feel useful to society, so I worked as an activities coordinator in a residential care home where I could use my organisational abilities to arrange stimulating tasks for the people I worked with. I still managed to surround myself with music and art, but have a gentler pace of life and share nice times with an older generation who still have much knowledge and wisdom to impart.

Community Assistant
I worked in the third sector for an integration network for a few years, which taught me a huge amount about the world, both good and bad. I learned how to cook in bulk for 40-60 people a few times a week, and I really enjoyed that. My role was quite varied, from working in a food bank, to doing arts & crafts with a women’s group, or accompanying people to institutional appointments, but ultimately working with people in a state of trauma while having virtually no support to help support them was something that weighed heavily on me after a while. So many challenges you would come up against would be institutional ones where workers have little-to-no power to really change a system which is broken and toxic. I burnt out with anger and sadness, and doubted my ability to help anyone at all, but after a while, I decided to become a community musician, so I could still work with people but feel like I was actually able to bring them joy and relief, because making music together always feels like a positive action even when you’re exploring darkness.

Check-out Assistant
One of my first jobs was working in a supermarket and through this I learned that I liked working with people. One customer who had dementia and kept coming in to buy the same packet of biscuits made me want to become a community musician to use my skills to help people. I used to write stream-of-consciousness poetry on my till rolls when there were no customers, inspired by conversations with them, and general daydreams.

Theatre Usher
Getting to see plays, dance pieces, Jazz, Folk and Classical Music for free was an amazing perk of this job and the staff I worked alongside were all really lovely, varied people from all kinds of backgrounds. It was great fun for the most part but sometimes a little tedious.

Gallery Invigilator
Being surrounded by beautiful art all day and being paid for it is really nice. It sparked off many daydreams and I learned a lot about artistic movements like surrealism and contemporary art practices across the world.

Bar Maid
I found the hours punishing as I worked in a late-licence music venue, and sometimes the environment was so loud I’d worry for the health of my ears, but it was alright although my weak eyesight could make it difficult to see spirit measures accurately in the near-dark that some establishments operate in. Because I started playing so much music in the evenings, this type of work didn’t suit me for very long.

Kitchen Porter
I did this for a few months in my early twenties and it was alright, although boring and repetitive. I felt satisfied when I managed to scour clean pots that looked like they hadn’t been cleaned for years and left them sparkling. It was a helpful stopgap to bring some money in when I had none, and there’s nothing like having a rubbish job to help you focus on what you’d really rather be doing, and work out how to do it.

Office Temp
I did temping when I moved out from home and had to support myself for the first time, and I hated this type of job more than any other. It taught me that working in offices is most definitely not for me, and that staring at computers all day is my idea of hell. Ever since I have always sought out positions where I get to engage with real people every day and in most of my jobs – even working at a checkout – I have always been able to sing whenever I wanted to.

Once, for a BBC Radio play, I got to embody Ben Cruachan, a granite mountain which has become a hydroelectric power station, and that was a really interesting project which required me to sing from the bottom of my (inner mountain) range to the top. That remains one of my highlights because we recorded it inside the turbine hall over a mile inside of the mountain, which was a stunning collision of nature and man-made technology.

I am named after a hunting dog.

My Grannie inspired me first of all, by teaching my folk songs and singing to me all the time when I was growing up. Professional musicians such as Kate Bush also had a big impact: first I was taken by her voice and melodies, then I was impressed by the concepts behind her work, and later I became more interested in the technology she used to make her work so texturally interesting, such as embracing samples and synthesizers.