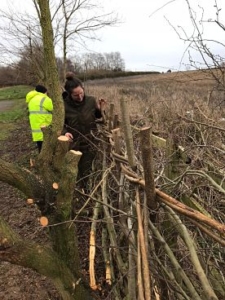 Me adjusting a stake for a laid hedge; this hedgelaying task – a traditional hedgerow management technique – was a volunteering training activity. (Photo taken by Doug Mitchell, 19 February 2020)

Before starting my career as a ranger I studied different areas of Performing Arts. It all started with new found confidence from taking GCSE Drama, and culminated in achieving a BA (Hons) in Theatre, with a particular interest in lighting design & operation.

I now enjoy seeing the theatrical in the natural world; from birds in flight that appear to dance in the sky, to the changes of light breaking through clouds and the leaves of trees creating shapes, shades and moods across woodland floors.

This music was inspired by an initial conversation with the composer in which Bats began to feature prominently! The composer combined inspiration from the Sywell Aerodrome Women’s Meeting of 1931 which you can see on a British Pathé News video from the day itself Queen’s of the Air ,and from the wildlife close by at Pitsford Water Nature Reserve and Brixworth Country Park.

As a young girl I would never have thought I could have a career in countryside management, my education was focused primarily in art.

My skills based training was learnt working alongside countryside rangers in Epsom, then volunteering with BCN Wildlife Trust. I have learnt many skills, new methods and ideas from my current colleagues, and volunteers.

I like to think that my experience might encourage those who might think it’s too late for them to take up a similar career choice.  It is not too late; it is possible. 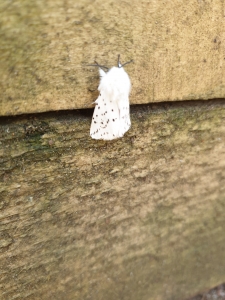 Food & Beverage Waiter
One of those in-between jobs at a hotel to pay the bills whilst volunteering!!

Patrol Ranger
My first steps into a new career of rangering; where I first learnt what might be possible 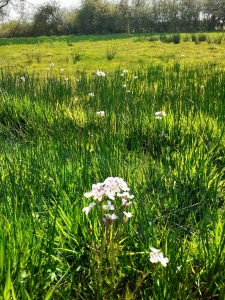 Landscape shot of a wildflower meadow on the Brampton Valley Way featuring Cuckooflowers that has been traditionally managed, previously by hay cut & rake method, and more recently by sheep grazing. (image by Debbie Samwell)

Never having been particularly scientific, or following an academically ecological study I couldn’t offer a scientific example as such.

When I think of my achievements I think of the people I have supported through my work in general and individually.

I have worked with young people from nearby colleges on general study and countryside management placements. Helping them to learn some of the traditional skills techniques, visitor engagement, facilities management and understanding the breadth of our role in country parks.

The achievement is in seeing their development throughout the placement, gaining confidence in themselves and taking pride in their work, inspiring them to pursue a similar career.

Some of the student placements and volunteers I have worked with have gone on to pursue roles in ecology, community engagement, arboriculture and rangering, and this in turn inspires me.

As a result of childhood mumps I have had no hearing in my left ear since the age of 3.  Whilst I am used to this for the most part I still struggle to locate and identify bird songs, sometimes needing to turn 360 degrees to work out where they are!

I once met Eddie Izzard in a British themed pub in LA (California) whilst visiting a friend.  It was the second to last day of my trip and we were just saying how we hadn’t seen any famous people when he walked into the courtyard, my friend froze, I yelled “Eddie” and then froze myself when he turned to look at us.  He was lovely, he came over to speak with us, and even let us have our photo taken with him! 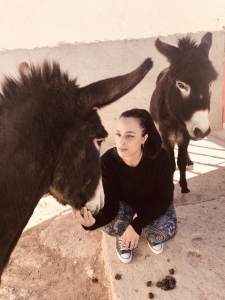 I first met Saadia when she came to me to seek a volunteer placement as part of her studies for a BSc Wildlife Conservation degree in 2014. Saadia had previously studied Media and had a successful career in television working as a producer. She felt a change was necessary in her life and has since forged an amazing career in wildlife conservation and research biology.

She has undertaken research on the distribution and behaviour of both the pink and grey river dolphins, which are endangered species in the Amazon rainforest, worked as a laboratory technician to explore the transmission of vector-borne pathogens in Seville, Spain and more locally researching the effects of climate change on hedgehogs in Leicestershire and writing a report.

She has plans to start a conservation organisation in Morocco focusing on vulnerable and threatened species and will work closely with schools and communities to help better understand the climate change crisis, the illegal wildlife trade, as well as providing workshops on sustainable living and conserving natural resources. Not to mention her own personal efforts to fundraise for Syrian refugees to raise awareness of their plight..

I have been so fortunate to have known Saadia from the near start of her journey into her conservation career, to where she is now.  In such a short space of time her dedication and enthusiasm to care for the wildlife of the world, she has achieved so much, and I will always be proud to have been a small part of this journey.

This particular article for the Brixworth Bulletin was co-written by Valerie Thomas. Val moved to Brixworth with her husband, and has been volunteering with us for a couple of years now. She is very keen about helping us with the country park in any way she can.

This is the first article I wrote for the Brixworth Bulletin after starting in my role as Senior Ranger in 2013. Writing for the bulletin keeps our local community updated and informed of the work we are doing to keep the country park and the way accessible for everyone to enjoy.