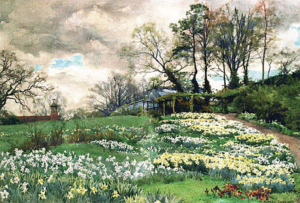 A wealthy horticulturalist with a passion for roses, Ellen Willmott (1858-1934) developed her family garden into a world-famous botanical centre and funded international expeditions to discover new plants. Today her garden has transformed into Warley Place Nature Reserve, which is a magical natural landscape well worth a visit. In place of Willmott’s 100 immaculately dressed gardeners, the reserve is maintained by Essex Wildlife Trust and their committed volunteers. For more Minerva Scientifica podcasts click here.

Her beautiful gardens reveal her artistic creativity. She was a keen photographer and woodworker, specialising in ornamental turning. She was also an enthusiastic musician: she bought several fine instruments, including a Stradivarius violin

The music reflects upon Ellen Willmott’s life at Warley Place. Willmott quoted this text in her obituary for her younger sister Rose published in the Essex Naturalist in 1922.

The Moon of Heaven is rising once again

How oft hereafter rising shall she look

Through this same garden after me – in vain

This song was one of many collected by Cecil J. Sharp, founder of the English Folk Dance Society.

It’s fresh, lively and old English feel is the perfect introduction to Willmott and Warley Place, given her own involvement in group singing and it’s expression of  the delights of living in the country.

From the age of 17, she was dedicated to the science of horticulture and improving the gardens at Warley). On her 21st birthday, her father allowed to build an artificial gorge and pool. Thanks to a large legacy, she purchased properties in France and Italy, and poured her money into developing their gardens as well. She cultivated around 100,000 different types of plant, and also financed botanical expeditions to China and the Middle East. Her garden partially survives as Warley Place Nature Reserve. 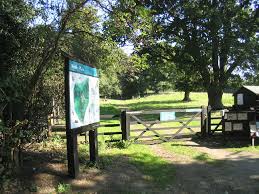 Her two-volume Genus Rosa of 1910-14 provided an authoritative and comprehensive study of roses, including 132 lovely watercolour illustrations. 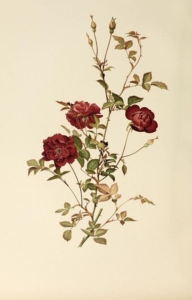 She employed over 100 gardeners, all of them men except during the War. She was a strict employer, but imposed the same high standards on her own contributions.

She apparently became increasingly eccentric, and rumours circulated that she kept a revolver in her handbag. There seems to be no foundation in the story that she scattered seeds of the giant thistles now known as ‘Miss Willmott’s ghosts’ in her friends’ gardens.

By spending her large inheritance, she created one of Britain’s most beautiful gardens. It ran to ruin after being sold to a property developer, but fortunately he was denied permission to build a housing estate.

Ellen Willmott was passionate about plants and she took advantage of her huge wealth to create a world-famous garden and to finance botanical exploration. Her influence continues in the high number of plants named after her. The extensive grounds she owned and beautified survive as a nature preserve, but sadly no longer exist as gardens demonstrating her exceptional skill and profound knowledge.