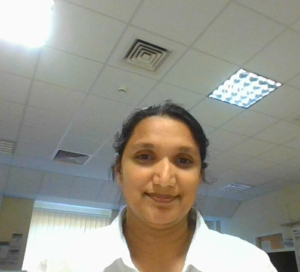 I don’t have any previous connections with music, sorry, but was looking forward to hearing what my physics would sound like!

Title:  Plastic could save the World
Composed by: Nala from BERTHA PARK HIGH SCHOOL
Written in: Nov 2019
For:  pre-recorded voices, clarinet and a gong, manipulated on Soundtrap
Sampled from: a solar cell printer, and Nala and Lethy’s voices
First Performed: Soutar Theatre, AK Bell Library, Perth, Scotland November 11th 2019 as part of “ECHOES FROM PERTHSHIRE” by ELECTRIC VOICE THEATRE

The image shows the process of solar cells absorbing energy. 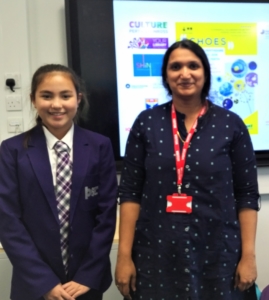 During my undergraduate studies, I got convinced that I have a passion for scientific research. I did my studies well to secure admission to a research-oriented University. I was the University topper for both my undergraduate and Master’s degree courses.

After getting a few years of research experience from India, I got UK Overseas Research Studentship to carry out research (Ph.D.) at the University of Strathclyde, UK.

During my Ph.D., I was experimenting on ‘light emission’ properties of materials. After Ph.D., I got interested in ‘light-absorbing material’ to generate electricity and that is how I reached working with SOLAR CELLS.

Tutoring School and High School Children
When I needed money

Research Assistant at University of Strathclyde

I am an experimental physicist which means that I have to do experiments that sometimes involved explosions!