Image by Dirk Röpert from Pixabay

There are no apparent connections with science – other than being part of the Minerva Scientifica project.

This hymn was discovered by Frances in the British Library and was due to be performed at the Brixworth Music Festival in May 2020. We believe it may not have been sung for 250 years. Originally the dedication was For the Benefit of the distress’d Weavers, but we have changed a couple of the words to point to the story of Northamptonshire Hymnodist and Lacemaker Eliza Westbury who died at only 20 within a few weeks of 3 other women in her home. Her story felt important to tell, despite not knowing if she had written any music for her hymns, as we were deep into research for impressive women in arts/science from Northamptonshire.

You can find PDFs of the score and text of The Lacemakers prayer at the following links:

Like most young girls of her time, Maria, also known as Polly, was taught at home, but her education was a particularly musical one! Her father was an organist and treasury clerk, but she lived in Dublin with her Aunt Cecilia who was married to the composer Thomas Arne. It was this Aunt who took charge of her musical education and who helped to build her career from the age of 6.

Singer
Barthélemon was a child prodigy who moved in the highest of musical circles. She performed in Opera as a child and made her London debut in 1759 in the Beggar’s Opera at Covent Garden and later sang in Italian Operas at the King’s Theatre in Haymarket where she studied with the Italian castrato Giovanni Manzuoli. Her singing was generally much admired. After her marriage she gave concerts and benefits with her husband.

Harpsichordist
She is noted as singing and playing harpsichord at Drury Lane in 1762 – presumably accompanying herself.

Composer
In 1776 she published her first work – a set of Six Sonatas for violin and keyboard dedicated to Her Majesty the Queen – which proved a success. It is possible she wrote more instrumental pieces but the only other scores that still survive are all vocal, and there are sadly few of these. You can find links below to see the full list. 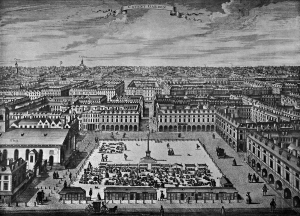 General view of Covent Garden looking north, circa 1720, from an engraving by Sutton Nicholls

Her European tour must have been a highlight for her, performing for royalty including the Queen of France, Marie-Antoinette.

At the age of 17 she married François-Hippolyte Barthélémon, violinist and composer at the Haymarket Theatre, not long after singing in his first opera there.

Their only daughter Cecilia Maria Barthélémon also became a performer and composer and appeared with them in performances.

The family lived at No. 8, Kennington Place, Vauxhall

They were close friends of the composer Joseph Haydn, appearing in concert with them and receiving him at their home in the 1790s.  Their daughter recalled the visit:

The dear good & respected Haydn was often with us — & express’d much pleasure, when my beloved mother took the upper part (with me) of a Duett of Handels (in his fine Opera of Poro) 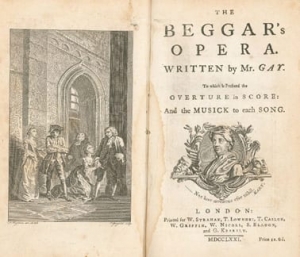 Score of The Beggar’s Opera

Maria Barthélemon appears to have inspired all those who heard her sing, and taught her daughter to follow in her footsteps, encouraging her to perform and compose. 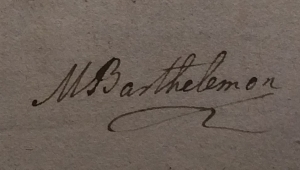