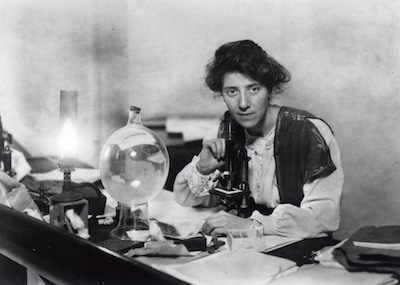 Initially educated at home by her mother, then St George’s High School, Edinburgh, and afterwards, when the family had moved south, in London. She took a science degree at University College, London, and in 1902, obtained a BSc with double honours in botany and geology. She was awarded a scholarship to study for a PhD at the Botanical Institute in Munich where she was the only woman alongside five hundred men. She completed this in 1904/1905. Soon afterwards, she was awarded a DSc from University College London, when she became the youngest Doctor of Science in Britain.

Marie Stopes was primarily a Palaeobotanist, who specialised in the study of fossil plants. Later, she became a pioneer in birth control.

Setting apart her achievements in the promotion and use of birth control, Marie Stopes was a recognised expert in palaeobotany, the study of ancient fossilised flora. While doing fieldwork in Brora, Sutherland in 1907, she discovered an important and as yet unrecognised Middle Jurassic fossilised plant. Her paper on the subject was noted by the Royal Society, who sponsored her research in Japan. While there, she produced a number of scholarly scientific articles on fossilised plants. An example of this is her 90 page long paper on cretaceous plants, published in the Philosophical Transactions of the Royal Society. On her return, she visited New Brunswick in Canada at the invitation of the Canadian Government, and published a comprehensive monograph on the flora of that region. An expert too in the constitution of coal, she prepared a monograph in 1918 for the Department of Scientific and Industrial Research, a study which was valuable economically as well as scientifically.

While in Japan in 1907-1908, Marie Stopes took the chance to write a non-scientific book too. Called: ‘A Journal from Japan: a daily record of life as seen by a scientist’ it tells of her experiences in the country, and includes lively descriptions of Japanese life and customs. European visitors were uncommon at that time, so it provides an interesting social account. An entry from December 12 illustrates how she embraced her experiences: ‘Another earthquake this morning! – but quite small, and still a third at midday, also too small to be any fun…’

Today, Marie Stopes is often thought to be a controversial figure. Her campaigns in favour of birth control for women were ahead of their time and not universally popular, and her views on sterilisation for those she deemed ‘unfit for parenthood’ would be abhorred today. She was undoubtedly, however, an acknowledged expert on fossil plants, and left a number of key scientific papers on that subject. In her co-authored articles from Japan, she was often the first-named author, her collaborator being Assistant Professor of Botany at Tokyo University. The calibre of her work shows in the fact that the Royal Society awarded her a grant to spend 18 months in Japan, when she was only 27 years old – completely unprecedented for a woman. While there, she also took the chance to write a book: ‘A Journal from Japan : a daily record of life as seen by a scientist’ about her experiences in the country. This book includes lively descriptions of Japanese life and customs. European visitors were uncommon at that time, so it provides a valuable record.

A Journal from Japan: a daily record of life as seen by a scientist
Scroll to top