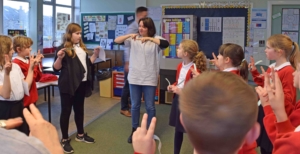 Science is fun and Learney!  One of the best things on our Minerva Scientifica project was learning all about the scientists and astronomers.

It was special making the constellations with DR CLAUDIA CYGANOWSKI the astrophysicist;  we learnt about Orion – the names of the stars, about their formation, and that Betelgeuse is the Hand of Orion. 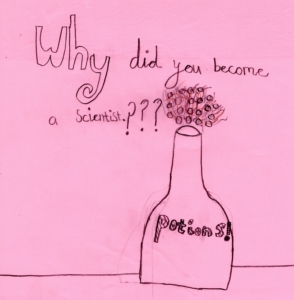 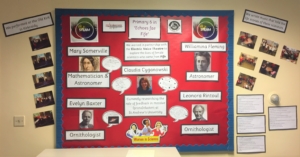 I found it unusual we actually wrote a song.

I liked the stamping and singing in the Mary Somerville song.

I like our song because I wrote it and sang it.

I liked thinking about the music.

I liked me squawking – it was funny.

We helped to write a song called Mary Mary which was about Mary Somerville. I liked how it told you what she did when she was my age in Burntisland

It’s not surprising that the children enjoyed writing and singing this song. It has proved so popular that it has been sung in all the following Echoes – Minerva Scientifica shows by primary school children who simply love it.

Aberdour is just a hop, skip and jump from Somerville’s childhood home in Burntisland. Science researcher, Catherine Booth gave a talk about Mary and then the children re-imagined what her life there would have been like when she was the same age as them. They chose places they knew themselves, where Mary would have gone to observe the natural world – the Sea Shore, Bin Hill, The Links and the Harbour and wrote a verse about each one. Mary had more freedom than most children of her age even today, and roamed around the coastline and countryside collecting shells and fossils, investigating the world. Ian Archibald at Burntisland Heritage Trust helped us find all these places and what things were like at that time.

You will find the words on this pdf. 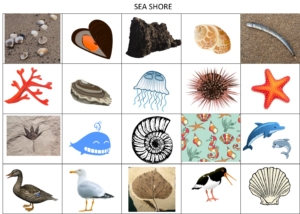 There was a great deal of excitement in the classroom as St Andrews University astrophysicist Dr Cyganowski and her colleague Suinan arrived for an astronomy session. It wasn’t long before the children were busy making their own models measuring the distances of the stars in Orion from the earth. Frances caught their excitement about what they had learnt in a short song which introduced their own music, generated by movements they developed showing the gas being pulled into a mass by gravity, the resulting explosions and formation of the stars of Orion. Each star was represented by 2 or 3 of the children who organised themselves into the shape of the constellation.  They made sounds to illustrate their actions which Herbie has electronically manipulated. See if you can hear all the stars in action and make your own map of the constellation! 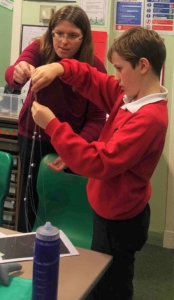 Dr Cyganowski helps a pupil to make his model of Orion 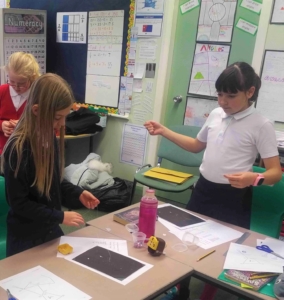 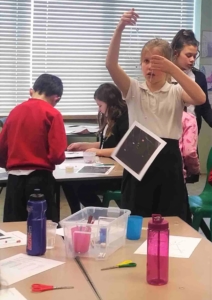 We have 3 cello and one violin players in our class, as well of lots who play guitar, piano and ukulele. One of us got to go to a theatre and play guitar.

We have a music lesson every week.

I wanted to be a scientist before Frances came in.

It was very inspiring and I do want to be a scientist now.

I thought about being a scientist because the project is interesting and fun.

I was scared to sing by myself but I got braver so I think I want to be a singer.

The best thing I learnt was the singing. 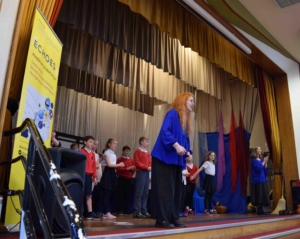 We performed “Echoes fae Fife” at Kirkcaldy Old Kirk. The show had its own song, and we sang it!

I’ve never seen so many brains in my life

Our scientists won through a great deal of strife

I liked the light bulb noise (the electric voice theatre voice warm up!)

We learnt some BSL signs and did them with our songs. 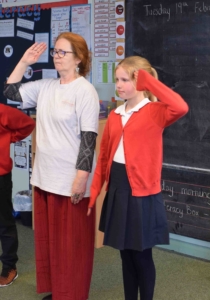 MARY SOMERVILLE and all the female scientists