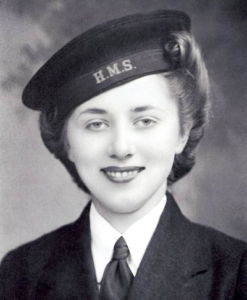 Image provided by the family 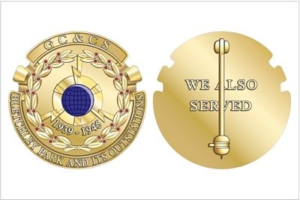 She enjoyed singing throughout her life, played the piano when younger, enjoyed dancing to the Glenn Miller orchestra during the war, and listening to music from the operas La Boheme, Aida and Fair Maid of Perth particularly.

LETHAM PRIMARY School make their own drums for the Bombe Machine

ERROL PRIMARY 7 get their bombe machine on track!

The music, recorded live, creates a world in which 2 women, one English and one Scottish, are doing a crossword while tending the Bombe (represented by the children) – something of course that would never have happened! They discover Jean Valentine’s name hidden in the machine. The piece was also performed on Nov 13th at Errol Primary School. 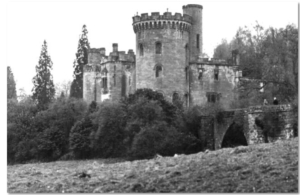 Jean Valentine went to Perth Academy. She left school early, and did not consider going to university, as there seemed a real threat of war. She decided to volunteer for war service instead, and joined the Women’s Royal Naval Service (WRNS, or Wrens).  A few weeks of her training were carried out at Tullichewan Castle, Dumbartonshire, then a training camp for Wrens. 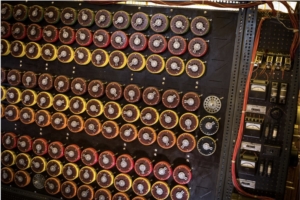 A model of a bombe machine at Bletchley Park Museum (commons: CC BY-NC-SA 20)

War service at Bletchley Park and Adstock Manor, one of its outstations
At Bletchley and Adstock, Jean worked on the deciphering machines, called Bombes. They consisted of large rectangular cabinets about eight feet tall and seven feet wide, with over 100 rotating drums on the front, each with letters of the alphabet painted round the outside. 200 machines in different locations worked 24 hours a day. She was one of a team of (mainly) women, working in 8 hour shifts. The women had to set up the drums on the front, and wire up the backs of the machine each day according to a complicated drawing, so that the drums could be set to mirror the settings on the German Enigma machine. When the Bombe found a match the operator had to note the answer and ring it through on the telephone to another part of the complex. It was the task of others to translate the message from German into English, and pass it on to the relevant authorities. Each worker only knew her/his own job, and nothing about what anyone else in the organisation was doing. When a message was decoded, they would simply be told, “Job up”, but never knew the name of the person whose work had been successful. 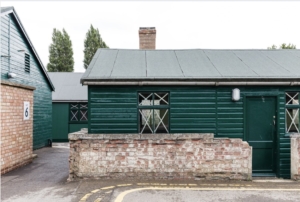 Code breaker of Japanese meteorological reports
Posted to Sri Lanka aged 19, Jean Valentine spent 15 months deciphering Japanese codes and ciphers and sending her results by teleprinter to Royal Navy units in the area. They had no machine to help them – it had to be done manually using figures.  She did not, however, have to learn Japanese, as the data was numerical.  Because she was still a teenager, she needed permission from her father before she could be sent overseas. She was not allowed to give him any details, but he agreed immediately, saying she must do her duty for the war.

Volunteer guide at Bletchley Park
Bletchley Park opened as a Museum in 2006 but from about 2000 Jean Valentine had already conducted tours round the site. After the rebuild was completed she demonstrated how the reconstructed decoding machine, the “Bombe” worked. Over this time she was frequently interviewed as a representative of the many thousands of people who worked there in wartime, most of them women.

It is possible to visit Bletchley Park Museum still on the original site, see the huts where the people worked during the war, watch a demonstration of the reconstructed Bombe and learn more about war work there.

About 10,000 people worked at Bletchley in code-breaking activities – bombe operators like Jean Valentine, and also people like mathematicians, linguists, cryptographers, chess masters and statisticians. It has been said that the work done at Bletchley and its outstations may have shortened the war by about two years – and Jean Valentine was one of the people who contributed to this. 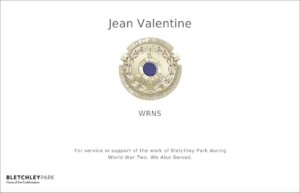 Jean Valentine was a tiny lady – only 4ft 10in tall.  She had to be supplied with a platform to stand on when she operated the decoding machine so that she could reach the top.

In her initial interview for the WRNS, Jean Valentine said she loved doing cryptic crosswords.  She thought that might have been why she was asked to work at Bletchley.

Churchill called the people who worked at Bletchley “the geese that laid the golden eggs but never cackled”.  None of them ever spoke out about their wartime experience until the mid-1970s.  Because both died in the early 1970s, neither of Jean’s parents ever knew what she had been doing during the war. All the workers had to sign the Official Secrets Act, and that was enough to stop any of them speaking out for several decades, even though no threat was ever issued to them of what would happen if they did break their silence. 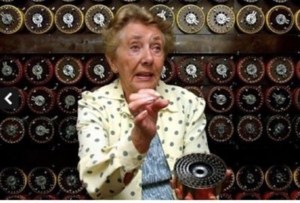 Jean Valentine with a reconstructed bombe machine behind her, demonstrating what she had to do (Image from diaphania.blogspirit.com) 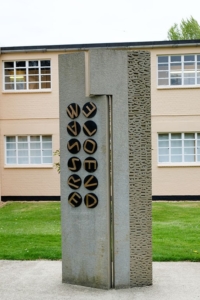 Memorial unveiled by the Queen in 2011 to the people who worked at Bletchley Park during World War II. The letters read “WE ALSO SERVED”. (commons: CC-BY-SA-3.0)

Jean Valentine was a teenager who had never been out of Scotland when she volunteered for war service. This showed courage, as she did not know what she might be letting herself in for. Along with many other women, she worked at the particular task which had been allocated to her, without knowing whether her work was doing any good or not. She did what she saw to be her duty, then maintained silence on that for about 30 years.

Once the whole story went public, she worked for several years as a volunteer guide at Bletchley Park Museum, using her own experience to educate and inspire visitors.