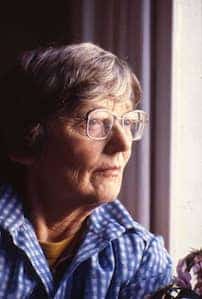 Photograph of Elaine Bullard, taken by herself

Acknowledgment: Grateful thanks both for help with the text and for most of the photographs to Sydney Gauld, Orkney Wildlife Information & Records Centre, who knew Elaine Bullard very well from his early childhood

Elaine loved Scottish dancing, so we assume she enjoyed Scottish dance music; Drew her own illustrations of plants; Was a good photographer – was a member of Orkney Camera Club and submitted photographs in their competitions 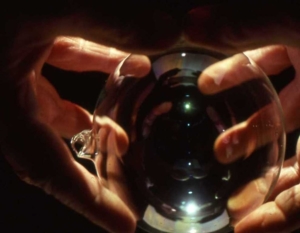 The music combines the work of  work of two scientists whose work may at first glance seem unrelated: –

In the New Scientist in 1998 a study by Elaine Bullard was cited in an article which began:

The Scottish Birds Eye Primrose is confined to the extreme north coast of Caithness, Sutherland and Orkney; it is found nowhere else in the world. It risks extinction at many of its few remaining sites…… Her work on plants which extended through her long life is still valuable as an indicator of changes in land use and climate.

Today, at the Environmental Research Institute at North Highland College in Thurso, scientists study these changes in much the same way – searching and counting – only with more technology at their disposal! Concerned about a development of underwater turbines, Dr Elizabeth Masden is part of a team studying the characterful, but neglected Black Guillemot – know in Caithness as the Tystie.

PLEASE CLICK HERE FOR THE PDF OF THE TEXT

After schooling in the south of England, Elaine Bullard completed a dairying course at College in Cornwall, where she initially gained certificates in buttermaking, cheesemaking, and the theory of dairying. Later she gained further dairying qualifications at Chelsea Polytechnic.

Botany, to which she devoted most of her life, was a science in which she had no formal qualifications, but which she taught herself by meticulous study and observation.

Milk recorder, employed by the Milk Marketing Board
Among other duties, Elaine Bullard would have travelled around farms, testing the yield and butterfat content of the milk produced by each dairy cow, and recording it. This helped to maintain national standards, but also provided the farmer with productivity information for each animal.

Botanist
Took early retirement to devote her life to study and catalogue the plant life of the Orkney Islands, as well as parts of Caithness and Sutherland.  Provided invaluable assistance to visiting scholars and academics, and welcomed and informed curious amateurs, giving guided tours and talks and leading work parties.

Author of scientific botanical publications
Wrote many articles and papers for scientific publications, and contributed to several books edited by others. 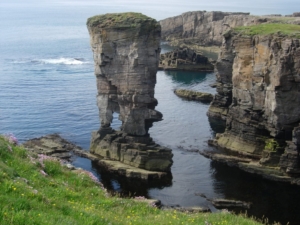 Sea stack off the coast of Orkney with wild flowers (Photograph provided by C. Booth) 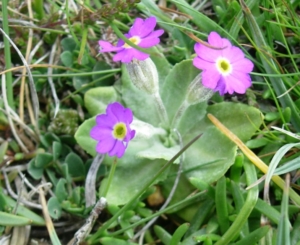 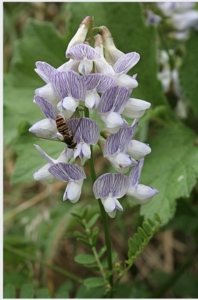 Wood vetch,VIcia sylvatica, common in other parts of Scotland, but rediscovered in a Caithness location by Elaine Bullard in 1974
(by GeographBot licensed under CC BY-SA 2.0)

Elaine Bullard lived very frugally, yet her work meant she spent many nights conducting research in rural areas away from home. She drove a Reliant Robin three-wheeled van, and adapted it with a tent attachment to serve as her accommodation.

She lived in a very small house, but had a garden which fascinated local children with its variety of trees, bushes and other plant life – not to mention the Call Ducks which she kept as pets. 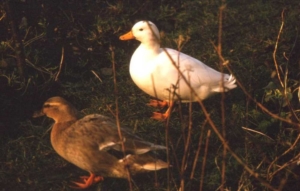 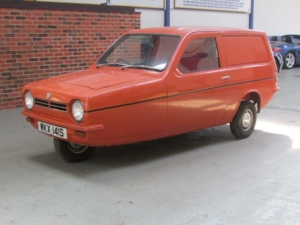 She continued to work as the Official Recorder for the plants of Orkney until she was 93 years old – perhaps an inspiration to all of us not to give up something we love because of advancing age. She seems to have coped effortlessly with the move to computerised methods of recording data.

Her tenacity in carrying out the tasks she set herself is something we must admire. It cannot have been easy for her carrying out her research and observation in all terrains and weathers. We wonder how she coped with midgies!

Local Orkney people have spoken of how she inspired them to develop a lifelong interest in natural history. Her insistence on accuracy was also said to be a valuable lesson to younger members of her community. 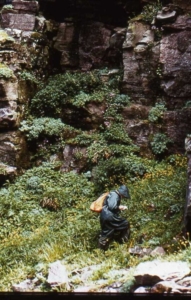 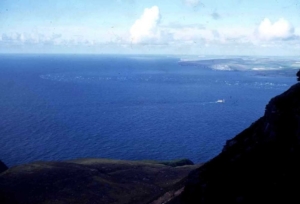