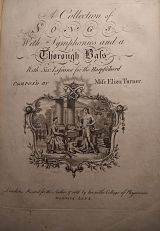 This entry was informed by an article published in “Early Music Magazine” in 2005 – ‘The ingenious Miss Turner’: Elizabeth Turner (d 1756), singer, harpsichordist and composer by Margaret Yelloly.

Her only connection to science is a tenuous one – it would appear that she lived for time at the College of Physicians in London.

Title: A Man That’s Neither High Nor Low
Scientist: MARGARET CAVENDISH
Words by: “A Lady”
Published: 1756
For: Voice, 2 flutes, 2 violins and bass
Performed by: Margaret Cameron (mezzo) and Jenny Miller (soprano) with Frances M Lynch realising the instrumental parts on keyboard
First Performed: Online during the Covid-19 Outbreak, 30th May 2020

This song was chosen as an interesting way of dramatizing Cavendish’s unusual (for the time) attitudes to men in our imaginary context of two women at a society ball in Essex discussing their view of the perfect man!  Frances found the music in the British Library originally and was able to take advantage of a modern printed score on this link. The singers begin with a conversation made up of some of Margaret Cavendish’s own words.

The music was recorded individually in the musician’s homes and combined and produced by Herbie Clarke at Birnam Studios, London as part of electric voice theatre‘s Minerva Scientifica – Connections 2020 project, supported using public funding by the National Lottery through Arts Council England.

By the list of subscribers on her publications it seems that she was well regarded by musicians so may well have been part of a musician’s family, and so educated at home.

Composer
Elizabeth Turner has only one publication extant: “A Collection of Songs with Symphonies and a Thorough Bass with Six Lessons for the Harpsichord”. There are 19 Songs, all of which are clearly in the English tradition, and not the more popular Italian style of the time, which are aimed at women playing music in their homes. The Six Lessons for harpsichord do indeed seem to be lessons which explore different techniques as well as being lively and full of character. Her music achieved popularity, appearing as it did in Magazines – including The Lady which also published work by Handel and other major composers.

Singer
Turner was most celebrated as a singer who was a favourite of composer William Boyce. She seems to have performed in prestigious venues with some of the top singers of the day like the tenor John Beard. Records of her performances – which appear for a short 12 year period starting in 1744 – indicate that oratorios by Handel, Arne and Boyce were her main repertoire. At a time when performance on the public stage was opening up for women, she managed to avoid the kinds of pleasure garden venues that might have besmirched her reputation!

Harpsichordist
Some of the performance notices indicate that she played harpsichord and it seems likely that she also taught keyboard given her publication of Harpsichord Lessons.

The highlight of Turner’s musical life must have been the extraordinary event that saw the Duke of Newcastle (later to become Prime Minister) being installed as Chancellor at the University of Cambridge in 1749. She set out for Cambridge with 100 musicians and singers (including John Beard) to perform music specially composed by William Boyce, including herself as a soloist with Choirs from St Pauls, Westminster Abbey and Windsor and instruments from the Opera House…. The following dinner was for 600 people. It must have been a glittering occasion.

It is interesting to note – that given her music has been chosen for the Minerva Scientifica project celebrating Margaret Cavendish, Duchess of Newcastle – the aforementioned Duke was very distantly connected with the Duchess who had married William Cavendish, the 1st Duke of Newcastle Upon Tyne in 1645. His first wife had given birth to the 2nd Duke whose line died out and it was passed over to in-laws (the Holles family) eventually then passing to the Pelham family and our Cambridge Chancellor – who was also confusingly the 1st Duke of Newcastle!

Records of her performances mention a sister who also sang – perhaps more than one. Her family history is not known.

Elizabeth Turner was one of the first women in England to publish such a substantial work, she was at the forefront of changing the way people thought about women performing on stage and inspired the admiration of many great musicians at the time.