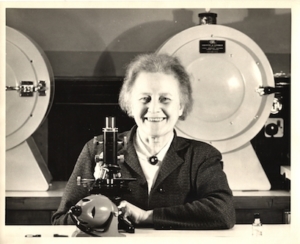 All photographs relating to Nora Miller were kindly provided by her family, who gave permission for their reproduction.

Nora was an accomplished pianist, and played the organ, often for church services. She was also a beautiful singer.

The piece was written for the Echoes Tour in 2018 and first performed at the Engine Shed in Stirling on September 18th 2018. It reflects the excitement of Nora’s life and that of her favourite fish – the Lungfish! The full text is here.
We acknowledge support from Creative Scotland, Historic Environment Scotland and Foundation Scotland towards the writing and first performance of this music. The composition was also supported by Hope Scott Trust. Frances M Lynch is supported by PRS Foundation’s The Open Fund for Music Creators. The performance was also supported by the Ambache Charitable Trust.

Nora Miller’s mother was a wonderful singer who studied with Hubert Parry. The words of this gorgeous lullaby have been slightly altered for her to sing to the young Nora about her future at sea. The first performance in this version took place at The Engine Shed, Stirling, on September 18th 2018. We don’t know when the piece was originally premiered.

Zoology demonstrator
Immediately after graduation, Nora began to work as a demonstrator in the Zoology Department at Glasgow University 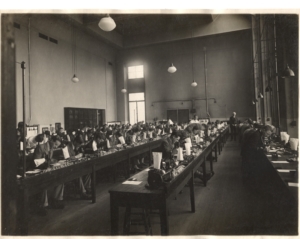 A zoology class at Glasgow University. The white-coated figure at the far end of the bench on the left is believed to be Nora Miller

Lecturer – Glasgow University
She was promoted to Assistant Lecturer in the Zoology Department in 1924, then Lecturer in 1929, and remained in that post until she retired

Lecturer – Paisley College
After retirement from Glasgow University, she started up a zoology course at Paisley College, and taught there herself for a number of years

Zoologist
Nora carried out her own zoological research while employed as a lecturer, concentrating on marine species such as lungfish and sharks. Lungfish have a swim bladder which acts like a lung, through which they breathe air 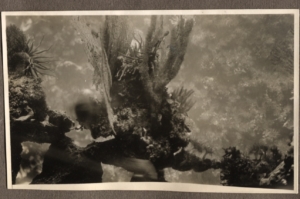 Amateur diver
Nora much enjoyed diving using a helmet and weights, to observe marine species in the wild.  She sometimes captured a specimen, and was careful to bring it to the surface in a container of seawater taken from its own marine environment, so as to keep it alive as long as possible.

Traveller
She delighted in travelling overseas, to countries such as Australia, South Africa, Bermuda and Italy, and combined tourism and leisure with work-related visits to marine laboratories and sites of interest to marine science. 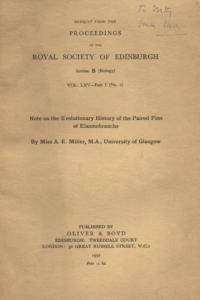 Copy of one of Nora Miller’s papers, inscribed by Nora herself to her sister, Betty

On her diving expeditions, she was often accompanied by a friend, whose job it was to pump oxygen into her breathing tube.  When her friend protested that she was finding this very hard work, she was cursorily instructed – “It doesn’t matter.  Just keep pumping!”

Playing the piano and the organ were almost second nature to her.  She assumed everyone could do it, and asked her niece one day to take over from her in the church, thinking it unimportant that her niece had never actually had any lessons in organ-playing. 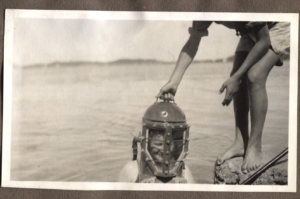 On a dive off Bermuda in the 1930s. The air tube can be seen in the bottom right corner. 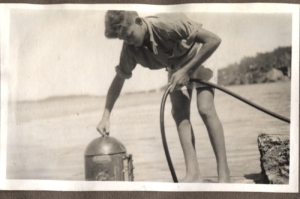 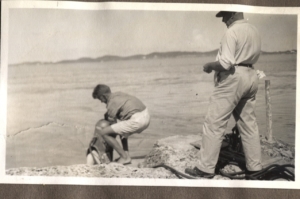 Nora was noted as an enthusiastic and articulate lecturer, who had a talent for engaging and engrossing her student audience.  Zoology was part of the curriculum for medical students, so she frequently had very large university classes.  Several generations of students were fortunate enough to be taught by her. Yet she did not restrict her teaching to students at university level, but devoted several years after her retirement to the introduction and teaching of zoology to college students.

She was a pioneer in her field of zoology as well as in underwater exploration, at a time when few women were involved in these activities. She deserves to be much better known as a role model for young people today.