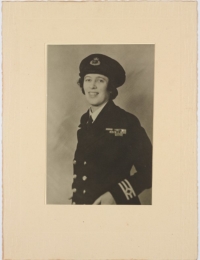 Victoria Drummond was able to do exquisite embroidery, and took it with her when she sailed.

This operatic song presented itself to us as the perfect way to tell the story of Victoria Drummond – she talks about loving opera and it contrasts well with her work in the bowels of a ship. This video was made at the Edinburgh Fringe in 2017 and takes up Victoria’s story just as she arrives on holiday in Vienna on the day the Nazi’s invaded……..

From childhood, Victoria Drummond decided she wanted to be an engineer. Her father thought that a week’s work in a garage would be enough to put her off, but it made her all the more determined to continue. She then served a two-year apprenticeship in the Northern Garage in Perth.

Becoming a marine engineer was her ultimate dream, and she became an apprentice at the Lilybank Foundry, part of the Caledon Ship Works in Dundee, the only woman among 3,000 men.

Her first job was as tenth engineer on a ship with the Blue Funnel Line, sailing from Glasgow to Australia. She continued to sail on various ships for much of the rest of her career.  It was not until 1959 that she was allowed to sail as Chief Engineer – but under a Panamanian flag. She was convinced that the Merchant Navy in Britain would never allow her to sail as Chief Engineer because she was a woman.

In later life, Victoria Drummond continued to work as an engineer, often on shore as a superintendent in shipyards in Dundee and Burntisland. 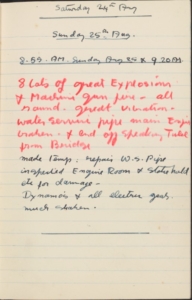 Her aristocratic background meant that as she sailed into various ports, she would be invited to visit people who were friends or contacts of her family. Taking off her oily overalls she would dress herself in smart clothes and white gloves, and go off and pay visits.  We could wonder how she was able to make her fingernails clean enough for such occasions!

Victoria’s family were and are extremely proud of her achievements and supported her despite her father hoping he could persuade her into a more respectable line of work!

Victoria Drummond grew up in Megginch Castle, and was the god-daughter of Queen Victoria.  Many girls with her background would not have been expected to work for a living, and very few would have taken on manual work. This made her very unusual indeed. With an upper-class upbringing and accent, she suffered additional prejudice, but her own character, personality and ability helped her to be widely respected by many of her fellow seamen.

Victoria Drummond’s spelling and writing were poorer than average, and her family now believe that she suffered from dyslexia, long before diagnoses were made of the condition. She did not allow this disability to put her off.

She did not give up easily, and sat examinations for her Chief Engineer’s certificate over 30 times, but always failed. Although she was never told directly, it was implied that as a woman, she would never be allowed to pass.

The seafaring union, Nautilus, present a Victoria Drummond award to women who boost the profile of women at sea by their achievements.

Victoria is continuing to inspire generations of women engineers, including the current generation of Drummonds, with one of her great, great nieces now studying mechanical engineering at University! 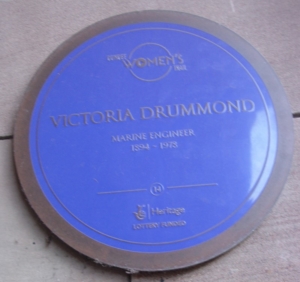