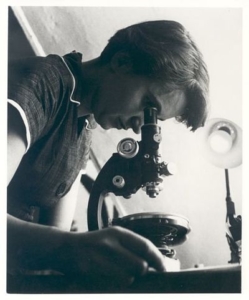 Rosalind enjoyed the theatre and art, but her real passion outside of science was for the outdoors, hiking and especially the mountains. 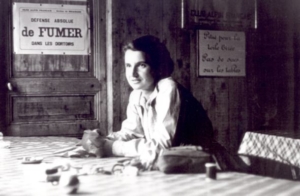 Rosalind in an Alpine hut (photograph by Vittorio Luzzati)

Rosalind was not musical, to the disappointment of the director of music at her school, a certain Gustav Holst!

The music is inspired by discussions with Prof Brian Sutton about Franklin’s work on Virus Structure. The text includes quotes from “Structure of Tobacco Mosaic Virus” by Dr Rosalind E Franklin.

You can download the full text of VIRUS here

In January of 2015 a group of four composers, four scientists and four singers met together at Kings College London in a series of workshops and performance events to create a set of variations on the theme of Rosalind Franklin. The scientists were from a variety of disciplines – Psychology, Renal Sciences, Human Genetics and Theoretical Physics.

The results were recorded and released by First Hand Records – you can find the CD on their site JUST CLICK HERE. For downloads go to Presto Classical.

“Electric Voice Theatre’s wonderfully manicured sound, ultra-clear enunciation of the texts…and marvellously dramatic delivery of texts and music are wholly winning…the myriad styles and resonances in the music are delivered with aplomb…required listening for oh, so many reasons!” (Gramophone)


Extracts from a performance at Warwick University, 2016

Franklin attended St. Paul’s Girls’ School in London, studying Physics, Chemistry and Pure and Applied Mathematics in her final years.  She won a place to study Natural Sciences at Newnham College, Cambridge, specialising in Chemistry in her final year.

After studying Natural Sciences (Chemistry) at Cambridge University and undertaking a short research project there, she worked for the British Coal Utilisation Research Association in Kingston-upon-Thames, London; her work there led to the award of her PhD in 1945.

During the Second World War, she investigated the structure of different types of coal, which was important for the war effort and reconciled her father to her chosen career as a scientist.

In 1947 she moved to the Laboratoire Central des Services Chemique de l’État in Paris, where she developed her skills as an X-ray crystallographer.

X-ray crystallography is a technique used to elucidate the molecular structure of materials, ranging from inorganic minerals to biological specimens. Franklin used her expertise to look at carbon and graphite in coals, and  to study the structure of DNA. and viruses.

In 1951 she moved to King’s College London, where she joined the Medical Research Council Biophysics Research Unit analysing  DNA.

In 1953 she moved to Birkbeck College, London, where she used X-ray diffraction techniques for her important work on the tobacco mosaic virus. 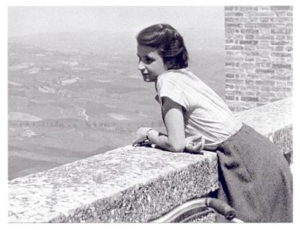 On a cycling holiday in Tuscany (photograph by Vittorio Luzzati)

Although taught at school by world-famous Gustav Holst, Rosalind disappointed him in his belief that “everyone had music in them”.

After finishing a term in Cambridge, she wanted her bicycle at home for the vacation, so she simply rode it to London, a ride of more than 50 miles!

The most famous of her X-ray diffraction photographs, taken whilst working with her PhD student Raymond Gosling, is known somewhat enigmatically as “Photograph 51”. One of a series, it was taken in May 1952 and shows, by its X-shaped pattern, clear evidence for a helical structure. 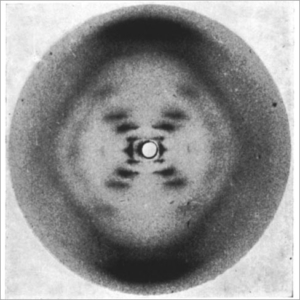 It was this photograph, seen in early 1953 by James Watson, which enabled James Watson and Francis Cricktto build their model of the double helix. Their structure of DNA was published in the journal Nature in April 1953, alongside a paper by Franklin and Gosling showing Photograph 51 and other information, confirming the Cambridge model, and a third paper from Maurice Wilkins and others at King’s. Rosalind Franklin never knew that Watson had seen Photograph 51 before building  Cambridge’s model, nor that he and Crick  had also been given access to other key elements of her data; their   paper does  not appropriately acknowledge this fact.

Poignantly, in a draft manuscript dated 17th March 1953, one day before news of the double helix model in Cambridge reached King’s in London, Franklin described a double-helical structure, with the two coaxial chains off-set from each other in exactly the same way.. She was so close to the answer!

The inscription on her gravestone emphasises the significance of her work on viruses:

Rosalind Franklin was an exceptional experimentalist who inspired those around her through her attention to detail, uncompromising approach and above all her dedication to science. In one of her early letters home she wrote:

“Science and everyday life cannot and should not be separated”

In his obituary, J.D. Bernal, Head of the Department at Birkbeck College, wrote:

“As a scientist Miss Franklin was distinguished by extreme clarity and perfection in everything she undertook. Her photographs are among the most beautiful X-ray photographs of any substance ever taken. …[She] inspired those who worked with her to reach the same high standard” (Nature, July 19th 1958).

Despite his high praise, Bernal called her ‘Miss’ rather than ‘Doctor’, just one small indicator of the discrimination female scientists faced on a daily basis. Paid less than men for the same work, women found it difficult to secure the top jobs. In his book “The Double Helix” (1968), James Watson wrote so disparagingly about her that she became a symbol of female victimisation. But as her sister Jenifer Glynn put it in her biography “My Sister Rosalind Franklin” (2012):

“…she was never a feminist – she would have thought of herself simply as a scientist whose achievements should be judged on their own terms, not as ‘woman scientist’ striking a blow for the rights of women”

Fortunately her achievements are now well recognised in their own right, in part through the superb biography by Brenda Maddox, “Rosalind Franklin, the Dark Lady of DNA” (2002). The most famous female British scientist, she serves as an inspiration to women and men alike. 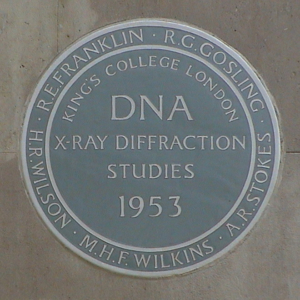 Plaque at King’s College London, Strand Campus, commemorating those involved in the X-ray studies of DNA (Image by Brian Sutton)