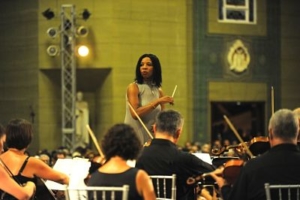 I am presently featured in the Stories of Women in Leadership exhibition with the scientist Maggie Aderin-Pocock.

I worked extensively with Prof Ellen Solomon, Chair of Genetics at King’s College London and whom attends my musical productions as does Professor Emeritus Elizabeth Kuipers, Chair of Psychology, KCL.

At the University of Westminster I am working on an interdisciplinary music and science project with the psychologist, Professor Catherine Loveday.

Questions Unanswered was written for Frances M Lynch for the Edinburgh Festival Fringe 2016 as part of an award-winning show, “Superwomen of Science”

I began playing the violin at 11 years and the piano at 14, so relatively late for someone that went on to become a professional classical musician. However, I obtained Grade 8 music theory with a mark of 98% by the time I was 15 and ‘distinctions’ in my instrumental exams which I took between the age of 11-18 years of age.

I enjoyed leading the local youth orchestras and singing in the local choirs. I loved history and was torn between studying this and music. With the huge investment in music, including the many hours spent practicing my instruments, rehearsing and performing in several orchestral concerts and shows, I opted for studying Musicology with Modern History at the University of Liverpool.

I was encouraged by my professors to pursue my talent in Composition after my first degree and gain a place to study for an MMus in Composition & Contemporary Music Aesthetics at Goldsmiths’ College, University of London. When I gained a teaching and research post at the University of Westminster, I decided it would be useful to have a doctorate and gained a PhD in Composition (Towards A New Aesthetic of Opera) at Brunel University.

Attending performances of the ballet PUSH that toured to over 40 countries worldwide has been a sublime experience.

I am a big tennis fan, my favourite player is Arthur Ashe.

My Mum, Mrs Thompson, is my inspiration.