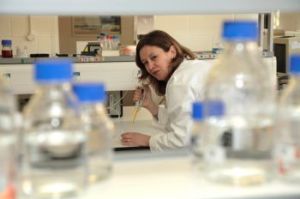 I don’t have any official connections with music or other arts but I am very interested in music (I played the flute as a child) and I am reasonably creative person. I like making pretty slides and figures.

Title: Misfolding for Dummies
Composer: FRANCES M LYNCH
Words by: FRANCES M LYNCH
Written: May 2021
For: Woodwind quartet, 2 violins and speaker
Performed by: the composer (all instruments are simulations due to current covid restrictions)

Frances wrote this piece to try to tell the whole story of misfolding proteins and their connections to Alzheimers disease. It is based on all the discussions we had this year about the project and what we wanted to communicate to the public. It ends with a message of hope.

Each composer attended our online sessions, heard about the science, worked on science/music parallels and created music and visuals which aim to communicate our research to the public. More details here.

I realised early on that I wanted to be a scientist, so I chose Chemistry, Biology and Maths at A-level. It would have been great if I could have fitted in a creative subject too! I then went to Nottingham to do a degree in Biochemistry and genetics, and I liked my research project so much that I decided to do a PhD. It was at Oxford that I discovered Protein Misfolding and learnt all about protein structure. After I finished my PhD, I went to work in Toronto, Canada and there I specialised more in Alzheimer’s disease research. I had the opportunity to return home to Cambridge (it literally was my home!) and I started working on my own research there before moving to University of Sussex where I have been ever since.

Various Washer upper jobs as a temp in the holidays.

Cookie shop on Saturdays (I was sacked for being too slow).

Research technician at the University of Cambridge Department of pathology in the summer after my A-levels.

Research technician at the National Institute for Agricultural Botany in my gap year (6 months).

English as a foreign language teacher in the holidays from Uni.

English with a family in Italy in holiday from Uni.

Barmaid in Oxford in the evenings during my PhD.

I worked on Athena SWAN (gender equality charter) and I feel very strongly about the proper support and representation of women and other protected characteristics in STEMM. I believe that diversity and inclusivity are key to our work.

My research work focusses on how proteins misfold and how this can result in diseases like Alzheimer’s and Parkinson’s disease. I am interested in protein structure and how protein structures are important in the functions of the protein and how, when they misfold, they can become toxic to cells.

We have worked with charities like the Alzheimer’s Society and Alzheimer’s Research UK on numerous public engagement events when members of the public have been invited to hear more about our research. I feel this is essential for us to share information about how funding is used with the public and for us to learn from the public what they feel is important. In Alzheimer’s disease research, it is really important for us to remember why we are doing the research, even when we are focussed on atomic details!

Life is a rollercoaster and trying to ensure that your work doesn’t overwhelm you is incredibly important. Relatively recently (late in life), I discovered distance running. I would say this is very slow distance running, but it clears my mind and helps with the stressful conditions of work. Science, as with other research areas, is fraught with judgements. It can be hard to hear the responses to your hard work on grants and papers, so it is important to keep a balanced perspective.

More recently, I have discovered the wonderful world of sea dipping. There is nothing better than a quick dip in the sea in Brighton in January followed by a cup of warm coffee on the beach!

From a very young age I was inspired by the story of ROSALIND FRANKLIN and her contribution to the structure of DNA. In fact, I ended up working on a similar research topic, except instead of DNA, I worked on the fibrous structure of amyloid fibrils!

Other than that, I have been very lucky to have several female role models, including Professor Sheena Radford in Leeds, who is an amazing scientist who also works on misfolding. I was also lucky enough to work with Professor Susan Lindquist, who was an incredible person and whose work on who proteins fold continues to inspire us. Sadly Susan died too young in 2016.