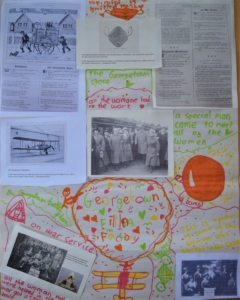 Our standout memory at the Beacon Arts Centre show was the kids, absolutely amazing – their wee songs were amazing!! So impressed!  Sandra McLaughlin & Cathy Bethel from Clydeside Singers

This is a live recording, made at a school assembly just before the Beacon performance. It was inspired by poems and stories published in the works magazine of the Georgetown Munitions Factory where AGNES BORTHWICK (1889-1949), born and brought up in Greenock, was manager. She was in charge of more than 7,000 workers, who were mainly women, but the site was wiped out not long after WW1. These magazines give some lively insight into life there.
Like the next song – this formed part of a larger work in the show which celebrated the work of Agnes, all the women at the factory and those in similar work places all over the UK.

Like the previous song – this one is a live recording. It was inspired in the same way and like the previous song was created by the composers choosing scraps of text and pictures from the magazines of the Georgetown Munitions Factory. The two classes worked separately – and each one split into groups who worked on their own verse, then each class met together to write their choruses. The children really got to grips with life in this factory, and it’s clear from their songs that they were excited to bring the words and stories of these women engineers to life. 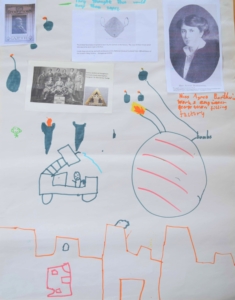 Drawings by P6A&B of the Georgetown Munitions Factory

In our class there are lots of singers, and some of us play instruments like guitar, drums, piano, violin, flute, piccolo, trombone and harmonica. Our school have a really good choir, and we can have brass, woodwind and singing lessons too. We use ABC Music online in the classroom

P7 getting ready for their performance 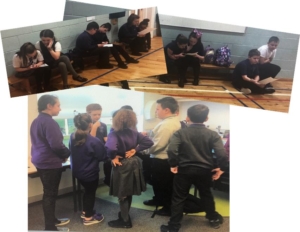 Pupils get into groups and starting writing their music

We performed “Echoes from Inverclyde” at the Beacon Arts Centre. The show had its own song, and we sang it! 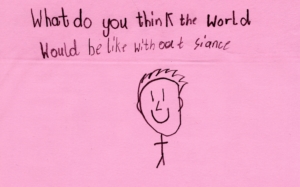 What do you think the world would be like without science

Music: I thought about being a singer because FRANCES made it fun & interesting

Science: MARY SOMERVILLE and all the other SCOTTISH SUPERWOMEN OF SCIENCE