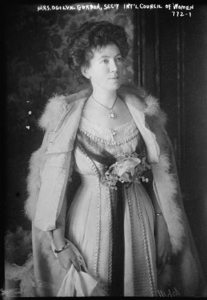 Image by Library of Congress on Wikimedia Commons

Catherine Booth – Science Historian and retired Science Curator, National Library of Scotland discusses the life and work of Maria Ogilvie Gordon with Ediacran fossil specialist Dr Emily G. Mitchell – ​PI and NERC Independent Research Fellow Deep-time Ecology Group, University of Cambridge. Their conversation is interwoven with music by Helen Hopekirk and Frances M Lynch (below) and compares the lives of women doing field work 100 years ago and today and how the concept of Deep-Time continues to evolve.

Maria Ogilvie Gordon originally planned to be a pianist, and when she was 18, went to London to study at the Royal Academy of Music. After 1 year there, when she was considered of a suitable standard to accompany the Academy Orchestra at public events, she changed her mind, and turned to the sciences. Music remained an interest all the rest of her life.

In at least one of her articles, Maria Ogilvie Gordon combined her observations in geology with her knowledge of music. In: The origin of land-forms through crust-torsion, published in the Geographical Journal, (October 1900), she said: “This aspect of the structure of any great mountain crest or system presents a suggestive resemblance to a diagram of the condition of a medium transmitting a complex sound, such as that of a musical note with several harmonics…”

electric voice theatre · The Voice Of The Mountains By Helen Hopekirk

Title: The Voice of the Mountains
Composer: HELEN HOPEKIRK
Words by: Barclay Ritchie
Written in: 1913, Obertraun, Austria
For: Voice and Piano
Performed by: Frances M Lynch

Composer Helen Hopekirk was a contemporary of Gordon’s and like her came from Scotland, was a pianist, and achieved a place at the top of her profession. It seems that Hopekirk wrote this particular song while touring in Austria at around the same time as Maria Ogilvie Gordon was working in the Dolomites, not so far away. It sounds like the call the geologist heard every morning!

TrowelBlazers was set up by an inspirational group of women to celebrate women archaeologists, palaeontologists and geologists who have been doing awesome work for far longer, and in far greater numbers, than most people realise.  In 2017 we were approached by Lyme Regis Fossil Festival to create a workshop and performance celebrating TrowelBlazers’ Raising Horizons Exhibition. This  tribute to them features only three of the many women whose work they celebrate – CHARLOTTE MURCHISON, MARY LYELL, Maria Ogilvie Gordon – with others featured including Rosemary Strachan Hutton and Alicia Ann Spottiswoode (Lady John Scott). 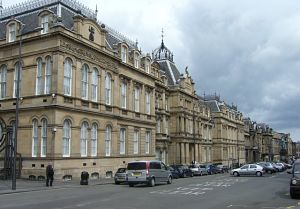 Heriot Watt College (Heriot Watt University from 1966), Chambers St, Edinburgh, where it was located from the 1870s until the 1970s (Image by kim traynor on Wikimedia Commons)

Maria Ogilvie Gordon wanted to continue to study for a doctorate, but universities in the UK at that time did not admit women for postgraduate studies. She was finally permitted to attend the University of Munich, although she was not allowed to sit in the lecture theatre, but had to listen from outside the room.

A DSc from the University of London followed (1893), then her PhD from Munich in 1900, with distinction in geology, palaeontology and zoology. 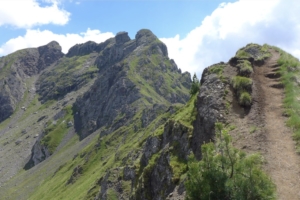 Geologist
Maria Ogilvie Gordon took a keen interest in corals, and considered becoming a zoologist in order to study them more closely. Shortly after her arrival in Munich, she travelled to the South Tyrol region of the Dolomites, now in northern Italy. There indeed she saw corals – but in fossilised form. That decided her career path, and she began what became her major geological work – the study of the geology of the Dolomites, its stratigraphy and fossils. The dramatic landscape and rock formations of the South Tyrol impressed her, and she was curious to find out how they had been formed. Before she produced her own theories, it was believed that the high peaks of the Dolomites were ancient coral reefs, unchanged for millennia. She postulated, from evidence she observed in the rocks, that folding action and thrust planes formed the peaks. This conclusion was eventually accepted by the scientific community. 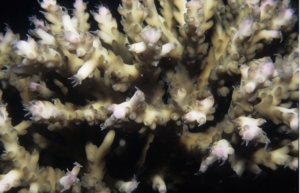 Pinkish coral polys out at night. Image by Derek Keats (CC BY 2.0)

Champion of Causes related to Women and Children
Maria Ogilvie Gordon held office in several organisations which campaigned for improvements in economic, political and social conditions for women. Examples: Honorary President of both the Associated Women’s Friendly Society and the National Women’s Citizens’ Association; President of the National Council of Women of Great Britain and Ireland; Vice Chair of the International Council of Women. Also, in 1919, she formed the Council for the Representation of Women in the League of Nations.

Study of fossil corals
She conducted her investigations by tramping around in the Dolomites – frequently alone – and collecting fossil specimens and making observations. 230 million years before, this area had been a tropical sea, and contained evidence of a large number of marine species. Maria Ogilvie Gordon took particular note of where her specimens were located, to try to understand the evolution of plant and animal life within layers of strata. From her own research, she described 345 species of molluscs and corals in the South Tyrol. Today, around 1,400 are known, but she was the first to recognise their importance. What was particularly important were her studies of the structure of the fossilised corals.

A paper she wrote on Madreporarian corals (‘Stony’ corals) for the Royal Society’s Philosophical Transactions B, vol. 187 (1896) was a scholarly treatment of the subject, over 260 pages long, with many sketches and diagrams. Yet Maria Ogilvie Gordon could not present this paper herself – that had to be done by a Fellow of the Royal Society, geologist Sir Archibald Geikie. It was another 50 years before any woman was considered worthy enough to become a Fellow. 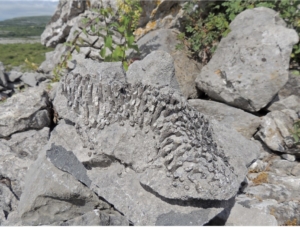 Author of scientific publications
She published more than 30 scientific papers, many of them in German scientific journals, as well as a major and definitive 400 page monograph on the geology of regions of the South Tyrol, Das Grödener-Fassa- und Enneberggebiet in den Südtiroler Dolomiten (1927). Recognising the appeal of the subject to non-specialists, she also produced 2 geological guidebooks which could be followed by visitors to the area.

Translator of geological work
Back in Aberdeen immediately after the birth of two of her children, she translated the work, Geschichte der Geologie und Paläontologie bis Ende des 19 Jahrhunderts (1899), by German palaeontologist, Karl Alfred von Zittel, under whom she had studied in Munich. Her version of History of Geology and Palaeontology (1901) was slightly shortened, at Zittel’s request. 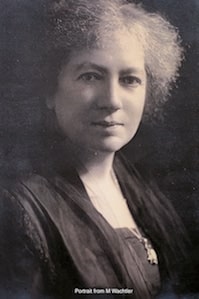 During one of her tramps in the Dolomites, a bolt of lightning killed two cows standing near her. She was said to have a fear of thunderstorms for the rest of her life.

Maria Ogilvie Gordon’s interest in corals prompted her to give her elder daughter the name Coral, a very unusual girl’s name at the time.

In 2006, a species of fossilised fern was named Gordonopteris lorigae after both her and another female scientist and explorer of the Dolomites, Carmela Loriga Broglio.

Geology remained her primary interest, and near the end of her life she said:

“The work was a joy, and I look back at expecting discovery at every corner as my happiest time.” 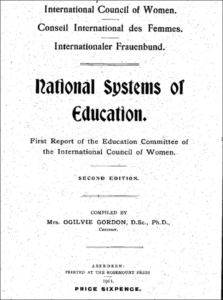 To learn about the geology of the Dolomites, she trekked alone in the mountainous terrain, staying in mountain huts,  collecting fossils, examining the strata, and writing up her results, which included a 78 page article for the Quarterly Journal of the Geological Society in 1893. In the meantime, still during her studies for a PhD, she returned home, married a physician from Aberdeen, and gave birth to two of her three children!

Her major work was written between 1900 and 1914, and was nearly ready for publication in 1914, when she had to leave it and Munich behind on the outbreak of war. When she returned to Germany in 1920, the manuscript had disappeared, and she set to completely rewrite it, resulting in its successful publication in 1927.

Always a strong supporter of rights for women, Maria Ogilvie Gordon believed that men, women and children should have equal rights, and she took on several roles in organisations which promoted these aims.

Her DBE was awarded “for public work on behalf of women and children”.

She also stood for Parliament as a Liberal Party candidate in the General Election in 1923.  She did not win – she didn’t expect to – but wanted to set an example for other women.

Biography
Article with images of Gordonopteris lorigae
History of Geology and Paleontology, Translation by Gordon, 1901
Article by Gordon in Geological Magazine, 1900
Early article by Gordon on corals
Madreporarian corals in Philosophical Transactions, 1896
Scroll to top