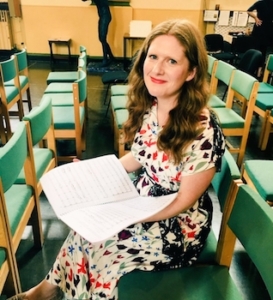 Frances invited me to be part of the Rosalind Franklin inspired project.

“Thinking I Hear Thee Call” by Cheryl Frances-Hoad is inspired by the life of FLORENCE ATTRIDGE, an Essex woman who, whilst working at the Marconi factory in Chelmsford during WWII, helped to make secret radio sets for spys. In this piece for soprano, speaker and electronics, we hear Florence recount her experiences, whilst, in another, secret location, in another time, a spy goes through the radio’s (complicated!) set up instructions one last time before going on their first reconnaissance mission. The electronic element takes sounds that are associated with Florence’s life and the history of Marconi, including morse code and “Absent”, the first song to be broadcast from the factory. The text for Florence’s part was written by Frances M Lynch based on research by Patricia Fara, and the speakers text comes from the official manual for the The British Type 3 Mark II Spy Radio.

Something More than Mortal sets extracts of the letters of Ada Lovelace. It was written for Frances M Lynch  for the Edinburgh Festival Fringe 2016 as part of an award-winning show, “Superwomen of Science”. The piece formed part of electric voice theatre’s Music for Advent 2020 and features in their Podcast Series (Episode 14: ADA BAB(BLE))

The piece is in 4 movements

It was part of the Franklin Effect Project at King’s College London in 2015 with 4 composers, 4 scientists and 4 singers. The video is a taste of all the works created –  the CD is available to buy here and downloads are available here

Photo 51
This piece sets the first two sentences of a paper by Wilkins, Stokes and Wilson published in Nature in 1953.

The contrary motion in the vocal parts is inspired by the image of Photo 51 – with the dots (indicating the double helix) going out in opposite directions, in 4 part symmetry.

Rosy of Course
This piece sets texts from Watson and Crick’s The Double Helix (1968) and an article in Nature in 1953, also by the pair. The first lines “Rosy of course did not directly give us her data. For that matter no one at Kings realised they were in our hands” describes Watson and Crick’s underhand acquiring of Rosalind’s data, and the second section sets an excerpt from the article in which they published ‘their’ discoveries about DNA, which of course made no mention of Rosalind’s work. The work is written for countertenor and tenor, in the characters of Watson and Crick.

Rosalind Fixed Her Steady Eyes Like X-Rays
Drawing on Franklin’s biography for inspiration, this piece takes its text from Rosalind Franklin: The Dark Lady of DNA by Brenda Maddox. “Rosalind fixed her steady eyes like X-rays on the human specimen before her” is a quote from the book that describes what Rosalind was like in conversation. The quarter tone glissandi, glottal vibrato and quartet tone vibrato in this piece are inspired by the X-rays that Rosalind employed in the taking of Photo 51.

The Instant I Saw The Picture
This piece sets a quote from James Watson, detailing his reaction to first seeing Photo 51 (“The instant I saw the picture, my mouth feel open and my pulse began to race’). Musically it takes inspiration from Barber Shop quartets, due to the fact there were four singers, and because it approximated the musical styles of the time that Rosalind would have been working.

Glissandi are still ever present in this piece: I imagine them to function almost like a lens adjusting, with the resulting sharpening of an image.

I was born in Essex in 1980 and received my musical education at the Yehudi Menuhin School, the University of Cambridge (where I was awarded a double 1st for my BA in Music and a distinction for my MPhil in Composition) and Kings College London (PhD, Composition).

I’ve also worked as DARE Fellow in the Operatic Arts at Opera North and University of Leeds, at the Cambridge University Department of Psychiatry as a Leverhulme Artist in Residence, and as Musician in Residence at Rambert Dance in London

The highlight of my career is coming up – a 30 minute work for Marcus Farnsworth (Baritone) and the BBC Symphony Orchestra at the Barbican on 30th November 2018, as part of the Armistice commemorations. The piece sets a new text by librettist Tamsin Collison.

I am excellent at growing vegetables!

Judith Weir has inspired me – although I had been composing for several years before I heard her music, when I did it confirmed to me that this was a career I could defintely pursue

My Website
Biography
The Franklin Effect
Scroll to top