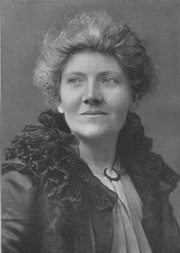 Fraser was one of the early pioneers collecting folk song in the UK on wax cylinders using the relatively new technology of the Graphophone in 1907. This delicate equipment must have been tricky to tour around the Hebrides making it essential to record the singers in a central place rather than going into their homes as she had done with pencil and paper during her first visit to Eriskay in 1905. 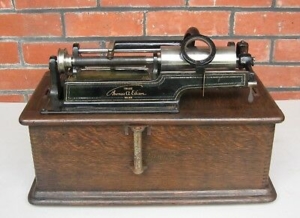 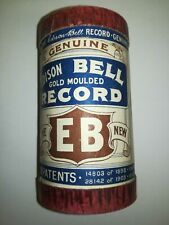 Marine Engineer Victoria Drummond’s C20th story resonates with that of Astronomer and Mathematician Mary Somerville a century before in that it starts with the sea. Both included admirals in their families and an early fascination with sailing. Mary had a ship named after her that sailed the world, but Victoria built and sailed them herself!

“In Hebrid Seas” from “Songs of the Hebrides” by Marjory Kennedy Fraser is a Waulking Song, one used by women to sing as they worked their tweed cloth. It references the seas Marjory herself traversed in all weathers to collect the songs she then meticulously prepared for the concert hall with her sister Margaret.

This is a live recording from a performance at AK Bell Library, Perth, Scotland on Nov 11th 2019 as part of the electric voice theatre project “ECHOES FROM PERTHSHIRE – MINERVA SCIENTIFICA”. 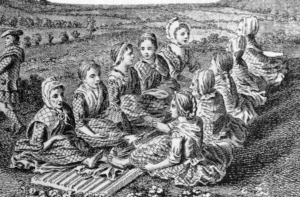 Her education is likely to have included school, and indeed, in her autobiography “A Life of Song”, she mentions having a school fellow who told her wonderful fairy tales while she was living with her grandmother for a year in Perth. In Edinburgh her piano teacher didn’t make a great impression on her, but he did give her good material to work with and in fairness he  “initiated his pupils into the conventions of harmony, and that I got over the measles of dominant sevenths, &c., before I was ten.” Her real practical music education lay with her father who taught her how to accompany singers in particular and she gave her first public appearance with him at the age of 12.

I elected to work with an old ex-opera singer, Signora Gambardella, who in her girlhood in Bologna had studied with the famous composer Rossini.

…but they treated her as a Soprano rather than the High Tenor she felt she was, it’s possible this damaged rather than improved her voice – she was clearly a good singer, but didn’t fulfil her potential.

In Edinburgh, during her years as a teacher, she attended lectures by Dr Frederic Niecks (Chopin’s biographer) for 10 years, learning about the history of music, about form and so on.

Performer
She began as a piano accompanist for her father and singing with her siblings in his backing group. They began by giving concerts in Scotland but in the 1870’s undertook a gruelling 4 year tour of Australia and New Zealand. Touring with various groups of her family continued for many years as they tried to fulfil their father’s wish to carry the songs of Scotland round the world to all Scots scattered abroad. All her life she continued to perform but gradually she included Gaelic songs and language in her recitals, and her own work.

Teacher
From 1890, after the death of her husband, Marjory settled in Edinburgh and taught piano and singing for 20 years. She worked with Tobias Matthay on his “reasoned science of the art of pianoforte playing and teaching”, helping to revise proofs of his first book “The Art of Touch” which revolutionized approaches to techniques.

Composer
Kennedy-Fraser was undoubtedly a composer, contributing much to the art song repertoire by way of arrangements, not to mention piano works and a suite for cello and piano. Where arranging and composing ends, is hard to delineate here. Certainly she was pragmatic, she wrote for her own performances as many composers have done, she had a living to earn and couldn’t have found the time to write for larger forces had she wished to.

Song Collector
Marjory Kennedy Fraser was for many years curious about the Gaelic heritage her family had lost. She had tried to learn to speak Gaelic, and in Edinburgh for 10 years ran lecture-recitals on Celtic Music from all over the UK.  Eventually, swept along on the tide of the Celtic Revival in Scotland, and keen to better her understanding of the language she found herself collecting songs on the Isle of Eriskay in 1905.

“I little thought as I got on board the little steamer sailing from Oban at six in the morning, that I was sailing into a world that would hold me in its grip for the rest of my life.”

She took these beautiful melodies to a wider audience by setting them for voice and piano and taking them into the concert hall in the form of lecture-recitals.

“These many years devoted to showing what the great songwriters could do in their settings of a simple vocal line of melody were surely my best apprenticeship for the task of trying to blend traditional melody with appropriate harmonic setting.”

She added her own words to many of the songs (which angered some in the Gaelic community) but later worked with Rev. Kenneth Macleod, a native Gaelic speaker who lived on Barra, he produced many English translations from the original verses, and provided the stories that set the songs in their original context.

When you open one of the many volumes of “Songs from the Hebrides” you might at first wonder if you have found, not a collection of songs, but an academic treatise on the music of those islands by a musicologist.

There is a lengthy introduction laying out her reasons for creating Art Song from this music, it’s benefits to the singers studying it, how it was collected and who from in huge detail, some examples of the different types of music she discovered in different islands and the differences between working, playing and praying songs. This is followed by an exposition of “The Hebridean Scales” with references to the modal systems and the work of other collectors like Robert Burns.

Then there is the Gaelic Editor’s Introduction and a list of rules for pronunciation before you reach the music.  You will also find texts and stories between the songs giving more detail and context.

Despite the criticism of her “use” of these melodies to her own end, it is clear that her intention was to bring this music to wider attention, and unlike many arrangers of traditional song, she was meticulous in keeping the connections to the source for the classical performers who were studying them.

Her greatest achievement is to bring this otherwise niche repertoire to a worldwide audience – many of us grew up with these songs because of her own performances and the famous singers who have since chosen to perform them.

To pursue your own ideas while making your way in the world and earning your living, is a brave and often reckless thing to attempt as a musician. Marjory shows us how this is not only possible, but fulfilling and rewarding in so many ways.

She inspired other composers  – eg. Francis George Scott and Granville Bantock for whom she wrote the libretto for his opera “The Seal-Woman”, including many of her published tunes and in which she performed as a singer with conductor Sir Adrian Boult.

In her dedication to the women of the Hebrides, shown below, she shines a light on her intentions of giving a voice to these women whose contribution to their own culture is often overlooked. 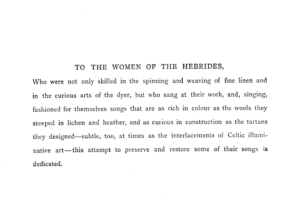 Dedication to the Women of Hebrides

Songs of the Hebrides
Autobiography
Echoes from Perthshire
Scroll to top