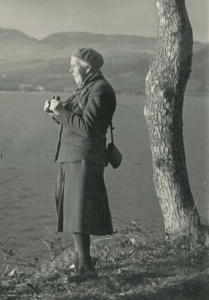 Evelyn Baxter produced beautiful embroidery, especially crewel work using wool to create a raised pattern on linen. All sorts of traditional crafts were of great interest to her. As she travelled around Scotland with Leonora Rintoul, the two collected woven baskets from local communities, and these were later donated to the National Museums of Scotland.

Although we do not know that Evelyn Baxter had particular musical interests, we know she had an excellent ear for recognising bird calls!

This short song gives a brief glimpse of the very rich lives of Baxter and her fellow ornithologist, Leonora Rintoul. With the Isle of May, where they did much of their important work, at the centre of the musical material, it branches out to explore their many interests and exploits across Scotland.

Dare was born in Fife as were the two intrepid ornithologists. This beautiful setting of Shelley’s poem could be one of those birds they wrote about after a bombardment by Zepplin on the Forth from which they noted a good many effects to the bird populations quite far from the attack. We made this recording using only 3 singers, but hopefully a choir will sing it again one day – the “good ladies” would definitely approve!

No formal education after school 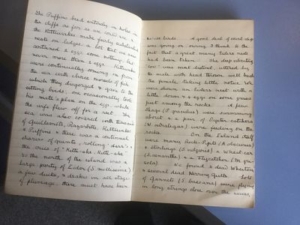 Entries from the journals of Evelyn Baxter. (Credit: Archive of Scottish Ornithologists’ Club)

Ornithologist
Tramped around most parts of Scotland studying birds with her lifelong friend and fellow ornithologist, Leonora Rintoul.

Bird recorder and journal author
Wherever they went, both women noted the birds they spotted, their prevalence and habitat, and noted the details in their handwritten journals. Evelyn Baxter carefully added the Latin name for most of the birds. These journals are now held in the archives of the Scottish Ornithologists’ Club.

Photographer
Evelyn Baxter’s family took an early interest in photography, and she continued to pursue this in the course of her travels.

Broadcaster
During the 1920s, Evelyn Baxter made wireless broadcasts for schools on birds and their habitats.

Administrator
Organised a section of the Women’s Land Army during both world wars. 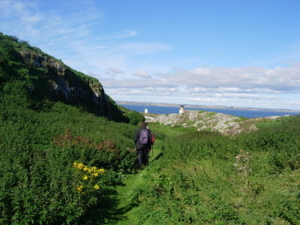 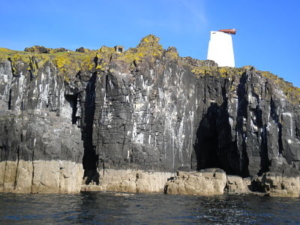 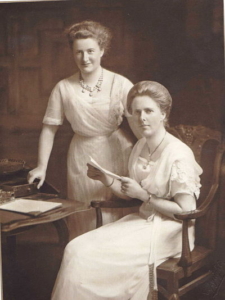 Evelyn Baxter and Leonora Rintoul. (Image by “emmysmart” on www.ancestry.co.uk)

Together, Baxter and Rintoul wrote accounts of unusual bird behaviour in particular circumstances, such as during a partial eclipse of the sun in August 1914, and during the Zeppelin raid on Edinburgh in April 1916.

Evelyn Baxter had several prominent forebears. Her great grandfather on her mother’s side was scientist and inventor, Sir David Brewster (1781-1868). He experimented in optics, and invented the kaleidoscope among other devices. He was interested in early photographic techniques, and was a good friend of Mary Somerville. Sir David Brewster’s wife was Juliet Macpherson, daughter of James Macpherson (1736-1796), poet and ‘translator’ of Ossian.

Her great aunt, Mary Ann Baxter (1801-1884) was a philanthropist who strongly believed in the education of women, and co-founded University College, Dundee.  Evelyn Baxter also had scientific female cousins – Dorothy Jackson (1892-1973) and her sister Annie Jackson (1889-1928). 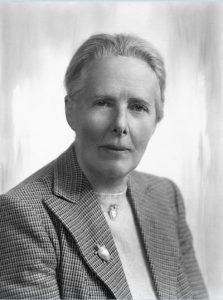 During her lifetime, Evelyn was an enthusiastic fundraiser for local causes, sometimes opening up her home and garden as a venue. She left a legacy for the Scottish Women’s Institutes, an Evelyn Baxter Scholarship, to encourage the preservation of traditional crafts. Notably, the scholarship was awarded to people willing to learn crafts in order to teach others – in other words, it was designed so that craft skills would be passed down to future generations.