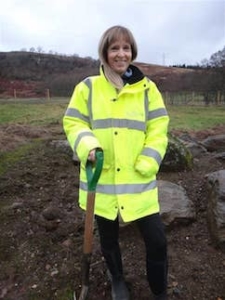 All images on this page were kindly provided by Dr Audrey Litterick.

I play in two bands. The main one (The Loch Tay Steamers) plays primarily Scottish traditional music and songs. The other (Ewe Three) is a new grouping, which plays mainly pop and rock. I also play regularly in informal music sessions all over Scotland with musicians in many genres of music.

I enjoyed being involved in a small way with helping to inspire creation of music about soils. I have had little to do with contemporary music. All my playing to date has involved traditional music, pop, rock and country with a bit of classical choral music , so this was a new departure for me.

The music is a series of riffs based on the important biological elements in soil – micro, meso and macro organisms and fauna, not forgetting the pathogens and pests!

The piece has 4 main sections:

Buried Treasure (Part 1),  about the precious Snow Pearlwort on top of Ben Lawers, was written by KILLIN PRIMARY SCHOOL at the other end of Loch Tay.  Some pupils from the two schools met at The Big Shed to perform the 2 parts together.  Buried Treasure (Part 2) was also performed to the rest of Kenmore School and to the composers parents and friends, alongside other songs about women scientists like BEATRIX POTTER.

Buried Treasure (Part 2) was written by 4 groups in the class, with a chorus by FRANCES M LYNCH

Group 1
Good and Bad is under the Soil

Group 2
Virus’ are bad, kills all life
Bugs that are good, keep them out

Group 3
Soil is good if you give it water, living creatures
Don’t forget the air!

The children used pictures to make the music – writing their own words, describing the picture and then making sounds that go with the pictures. They put them in order, using the idea of repeating and making a pattern just like music on a stave. See if you can follow the scores as you listen! 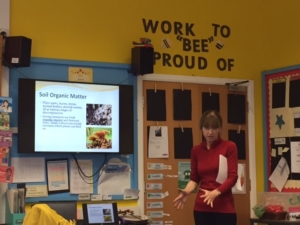 Giving a talk at Kenmore Primary 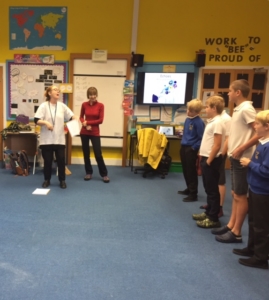 Helping Frances to sing about soil with Kenmore pupils

I went to a new comprehensive school (Balwearie Highschool, Kirkcaldy, Fife) which taught science to 1st and 2nd year secondary pupils in an innovative, highly practical way. Despite having a stay at home Mum and a bank manager Dad (neither of whom had any interest in science of any sort, and no university education), I was totally hooked on science by the end of 1st year secondary. It really was down to excellent secondary teachers since I had no encouragement whatsoever from my parents or wider family.

I had some very bad experiences in my early career (after graduation with my PhD), with extremely old-fashioned, misogynistic men failing to give me chances to develop. Such problems were common for young women back in the 1980s and 1990s, particularly in certain scientific fields including mine (agricultural science).

I searched hard for a move which would bring me a better boss and more “enabling” colleagues and found it after a long search at Aberdeen University. Finding colleagues who believed in me helped me to believe in myself and my career has gone from strength to strength since I moved there in 1998.

I have taken several (what many colleagues and family members considered) “career risks” over the years. For example, three times I have moved from a permanent position to a temporary one in order to stay in an interesting job and to (in my view) improve my long-term prospects. I have never once regretted taking calculated risks and am now in the enviable position of working within two successful small companies which specialise in interesting, useful work with a clear environmental purpose.

I ran the Horticultural Crop Health Clinic at Scottish Agricultural College in Auchincruive, Ayr. Although I loved this job, my immediate boss and head of department felt that I was likely to leave to have children and put no faith in me. Scottish Government also cut funding to my discipline and I suspected that I would eventually be made redundant. (Indeed I would have been, since the facility was closed 2 years after I left). I decided to change tack and accepted a job as a plant scientist at a new venture in a prestigious department at Aberdeen University in 1998.

I began work here as a project manager, applying for grants for research funding, supervising PhD students and post docs and was rapidly promoted through the ranks to become deputy director of the centre, in day to day charge of up to 25 staff and students. The centre moved to Newcastle university in 2001 and I chose to remain with my husband, in Aberdeen. 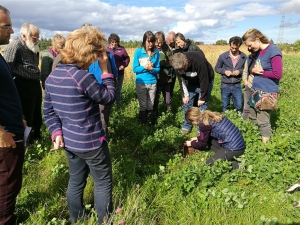 I helped run the Masters Programme in Organic Agriculture, applied for grant funding in crop and soil science projects and took part in the Scottish Government Science research programme in sustainable and organic crop production. I felt that my key skills were not being used here, due to the science being rather too theoretical and not sufficiently applied. I had little contact with farmers and land managers and for that reason applied for a temporary post at a lower level in Environment Division (and got it).

From 2005 until late 2009, I was SAC’s “Organics Specialist” and was responsible for keeping the advisors at SAC’s 24 advisory offices (located throughout Scotland) up to date on the latest information relating to organic wastes/ products and relevant legislation.  My involvement as a key member of SAC‘s specialist fertiliser advisory team along with my “FACTS-approved trainer” status placed me in an ideal position to help land managers understand the benefits of bulky organic materials for soils, landscaping, land remediation and crop production systems. I (along with a well-known scientist colleague) completed a substantial revision of several of the Scottish Technical Notes for fertiliser use on crops in Scotland.

Audrey Litterick Consulting Ltd. (owner and director) and Earthcare Technical Ltd. (shareholder, director and consultant). From early 2010, I have worked as a soil, crop and environmental consultant through two companies. Audrey Litterick Consulting (which I set up in 2009) primarily offers advice on small-scale horticultural production for crofters and small-scale farmers and growers. Earthcare Technical was set up by two colleagues in 2008. I became a partner in 2011 and a director in 2013. Earthcare Technical has developed an excellent reputation as a specialist consultancy company. Work involves the design, implementation and management of a wide range of projects involving field experiments in agriculture, horticulture, brownfield site restoration and landscaping to develop safe, effective methods for recycling organic materials to land. Clients include farmers and growers, local authorities, waste management companies, WRAP and Zero Waste Scotland.

I am an enthusiastic and accomplished trainer, a recognised expert in my field and I have published and contributed to a significant number of research papers and project reports which have defined best practice for using organic materials including composts and digestates in agriculture, horticulture and land restoration. I am determined to help make the Scottish organics recycling sector one of the best, most ambitious and most forward-looking in the world. I am passionate about soil health and the importance of soil health in determining crop health and productivity in agriculture and field horticulture. I am currently involved with several government and levy-board-funded projects which are looking at strategies to measure soil health and improve it using cover crops, rotational and tillage techniques and organic amendments including composts and digestates. 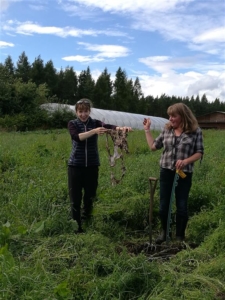 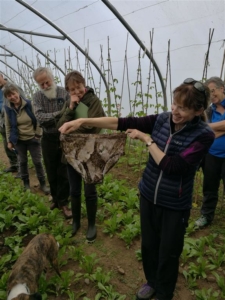 Apart from the training courses which I run (for which I nowadays get consistently excellent feedback), my main achievements would be the publications which define best practice for farmers, large and small-scale growers and waste managers. These have been based on both my own research and that of many others.  I am not a brilliant scientist, nor especially clever in a general sense. However, that no longer bothers me, because research institutes and universities are full of extremely clever scientists. My key skills involve being able to take complex ideas, concepts and scientific information and translate them into simple, clear guidance which people can follow in order to help them comply with environmental or agricultural legislation and to help them run their businesses and systems to best effect. I can do this both verbally, in training courses and in writing. The reality is that scientists who are excellent communicators are much rarer than scientists who are phenomenally clever and brilliant at the “research” part of their role and I have built the latter half of my career on that!

During the past 8 years, I have run well over 160 one-day training courses and seminars and have participated in workshops and farming and waste management conferences. I have also produced a large number of publications for farmers, growers and land managers.  A small selection of these are listed below:

Bhogal, A; Nicholson, FA; Rollett, A; Taylor, M; Litterick, A; Whittingham, M and Williams JR (2018) Improvements in the Quality of Agricultural Soils Following Organic Material Additions Depend on Both the Quantity and Quality of the Materials Applied. Frontiers in Sustainable Food Systems 2. https://www.frontiersin.org/article/10.3389/fsufs.2018.00009

Litterick, A., Vieweger, A.; Raskin, B.; Wood., M. & Pearce, B. (2018) Measuring and managing soil health in field horticultural crops – outcomes from the GREAT soils project. Proceedings of the Crop Protection in Northern Britain Conference, 2018, 21-26.

Litterick, A. (2015) Use of PAS 100 compost in raspberry production. Final report for Zero Waste Scotland.

I have always believed that in order to work hard, I must also play hard, and I certainly know how to play hard. I have three hobbies which take up all of my spare time.

I play in two bands and spend as much time as I can playing music with friends and making new musical friends.

I also enjoy growing food and have a large garden, which I work on with my husband. The garden has a vegetable growing area, a fruit cage, a small orchard, a wildflower meadow and a pond.

How do I find time for this, despite working between 45 and 55 hours per week? I watch very little television, I have nothing to do with social media of any description, I don’t play computer games and I never sit around doing nothing.

I have a good friend called Maisie Steven who is 96. She lives in Aberfeldy, and was (and still is) a nutritionist. She has a passionate interest in the ways in which diet affects human health and believes that far too many people rely on modern medicine to sort out problems which they themselves have created through over-eating and poor nutrition. Maisie was a scientist at a time when few women went to university and she still has plenty to say on her subject. She has written several books about the Scottish diet and the importance of good nutrition and has produced an easy-to-read version of the “Statistical Account of Scotland” for schools. Her husband was also an author, and her son is a poet and author. She is passionate about education and about people’s health and lives in general. She is also a musician and story teller. I visit Maisie regularly, play the fiddle to her, we sing together and we also talk long and hard on a wide range of subjects including current affairs, music, relationships and health. Maisie is no longer in good physical health, but her mind is sharper than most people a quarter of her age….. She is a complete inspiration to me.