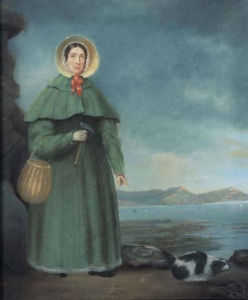 There are no known direct connections with the arts; however, Anning’s drawings of her fossils are not just scientifically accurate but demonstrate a high level of artistic talent.

The children created this amazing song during a series of 5 workshops which included talks from Emma Bernard, a palaeontologist and Curator of Fossil Fish at Natural History Museum in London and Dr Patricia Fara, a science historian, as well as a session with Dorset composer Karen Wimhurst. Frances M Lynch and volunteers from Sidmouth Science Festival helped the children use all their newly acquired knowledge to write this musical story about an ichthyosaur, and Mary Anning.
The film was created by Jack Sewell using materials from his onsite workshop at the school, including the model of Ixy by the children.

Voices for the Future – Mary Anning was funded by the National Lottery through Arts Council England and the Marchus Trust and was also supported by Mary Anning Rocks, The Geological Society and Sidmouth Science Festival.

The video is from the launch of the Minerva Scientifica project in 2013 at Plymouth University and includes extracts of a piece about Miriam Rothschild in addition to Mary Anning. We were joined by palaeontologist Kevin Page from Plymouth University, who gave a talk before the performance and kindly provided the historical images.  A complete video/recording will be available in 2021.

Mary Anning is a study of this famous Victorian paleontologist which posed particular problems to electric voice theatre singer and director Frances M Lynch. She recorded the video diary below during the rehearsal process for this piece, which looks at the problem of how to walk on a beach while on stage and make the correct kind of noise! For some time she went to numerous builders yards and walked about on samples of different stones until finding the best ones. The costume and final set were created by electric voice theatre designers Miranda Melville and Elizabeth Dawson.

A setting of this well known tongue twister which is said to be about Mary Anning  – a simple mesmerising round for any combination of voices. 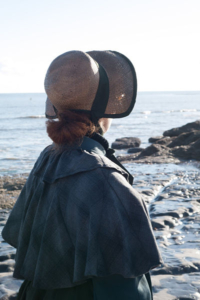 Frances M Lynch as Mary Anning, on the beach at Lyme Regis (photo by Helen Vincent) 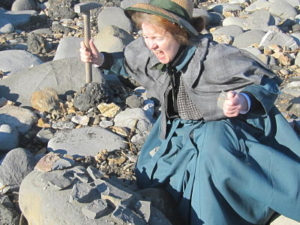 Very basic education, but she was literate and later became very well-informed about palaeontology. 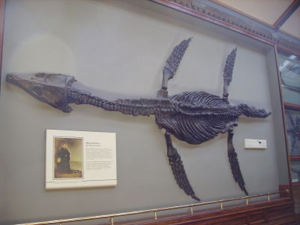 Fossil collector
She supported her family by selling fossils she discovered on the cliffs at Lyme Regis, and was only a child when she and her brother found the complete skeleton of a creature that in 1817 was named an ichthyosaur. This specimen established her reputation as a major collector.

Palaeontologist
She studied palaeontology so that she could recognise which fossils would be the most valuable. Her particularly important finds included plesiosaurs and a pterodactyl.

Mary Anning was important because she discovered exceptionally fine specimens of previously unknown creatures that led to major theoretical advances in Victorian knowledge of prehistoric life. Nowadays she is also highly regarded for her ability as a provincial woman to negotiate with metropolitan gentlemanly collectors. 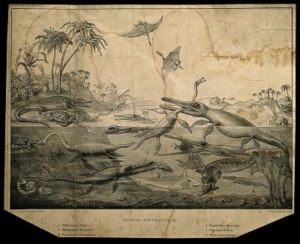 When she was a baby, she was with three women standing under a tree that was struck by lightning. They all died, but her apparently miraculous survival marked her out as someone special

Geologist Henry de la Beche painted an imaginary scene of prehistoric life in Dorset based on her fossil specimens, and sold prints to benefit her financially.

She wrote in a letter: ‘The world has used me so unkindly, I fear it has made me suspicious of everyone.’

She may be the inspiration for the 1908 tongue-twister ‘She sells sea-shells on the sea-shore’.

Mary Anning has become internationally renowned for the quality, quantity and variety of fossils that she found. After her death, Charles Dickens was one of the earliest to write about her inspirational life, and since then she has been held up as a role model that children can realistically strive to emulate.

One of those children is Evie Swire, who, as they left Lyme Regis beach after some regular fossil hunting, turned to her mum, Anya, and demanded to know why Anning didn’t have a statue. Her indignant question sparked their Mary Anning Rocks campaign which from nothing has successfully raised over £100,000, created a global profile and commissioned a beautiful tribute by sculptor Denise Dutton that will be unveiled on May 21st 2022. You can still donate here for their educational program – a long-term learning legacy specifically designed to benefit underserved children in our communities, making sure Mary’s discoveries and her voice is never ignored.