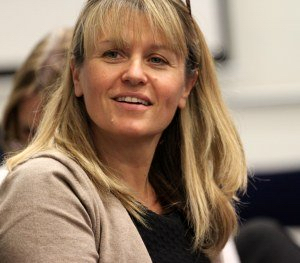 I had very few connections with the arts prior to my involvement with Minerva Scientifica and the Franklin Effect. I am however passionate about attracting and maintaining women in the STEMM specialties and through my involvement with the Athena SWAN initiative I came across Frances M Lynch and the fantastic Minerva Scientifica programme. Frances and her team had collaborated with KCL Arts to celebrate the works of Rosalind Franklin by linking KCL women scientists and women composers. I was lucky enough to team with LYNNE PLOWMAN who composed a striking piece of music based on the gene at the heart of my research.

Lynne composed a piece of music for 4 voices based on the genetic code of the Ras protein, a molecule which drives cells to grow and change their behaviour and one at the centre of my research. The music has a natural rhythm created by the 4 letter code which I think is both fascinating and captivating.  This is the first time I have heard a piece of music that is so closely embedded in, and derived from nature.

I went to a state comprehensive school in south London.  I was determined to study medicine from the age of 13 and was lucky enough to get into University College London.  I have always been interested in both research and education and am now able to practice both of these as I am head of years 2 and 3 of the King’s College London School of Medicine.  We run a large extended medical degree programme to attract students from less advantaged backgrounds and I am proud that KCL is able to offer these students the opportunity to follow their dreams and practice medicine.

Doctor
I have continued to practice medicine since I qualified as a medical doctor from University College London in 1991. I am now a specialist in Kidney Medicine.

Research Scientist
Alongside my clinical practice I have developed a career as a research Scientist, studying the science of kidney disease. I received my PhD in Renal Cell Signalling in 2001 from King’s College London with the help of a Kidney Research UK Clinical Training Fellowship.

Educationalist
Since 2017 I have also been interested in medical education. I am passionate about education and feel we have a great responsibility in training tomorrow’s doctors.

I have worked for years to understand the role of Ras proteins in the development of chronic kidney disease.  Chronic disease is caused by scarring in tissues which have been injured.  I have been studying why tissues scar, rather than recover and repair and have gained insights in to this process.  By increasing our understanding of this, we will be in a better position to develop drugs to prevent or slow the progression of chronic diseases such as kidney disease.

I have three lovely children (two boys and a girl) who keep me busy in my spare time and I also enjoy making celebration cakes for my family and friends.

I have worked with many inspiring women. ROSALIND FRANKLIN was my first inspiration when I was at school. I was angry at the apparent injustices done to her and I was determined that the same would not happen to me. During my early career, I came across a few (but not many) female consultants. Many were inspirational but I was struck by how few there were and this made it difficult for me to visualize myself in future leadership roles.

During my training however, one woman sticks out, Priscilla Kincaid-Smith. She was one of the first high profile female nephrologists who fought big pharma companies who she felt were selling harmful drugs. She became very successful despite having a happy marriage and three children at a time when many female doctors gave up their careers when they got married. She helped me to understand how women (and men) can successfully balance life and work.

So, when I eventually became a consultant myself I felt it was important to be as visible as possible.  I have been heavily involved in diversity and equality issues and led our departmental Athena SWAN committee for many years. This initiative encourages women to enter and remain in STEMM subjects and continues to place issues of diversity and inclusion at the centre of policy making in higher education institutions.