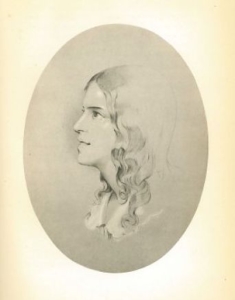 All images on this page are by kind permission of Dr Jim Walsh, Chief Executive Officer, Conway Hall, London

None that we have found so far except for the very tangential coincidence that her beloved sister’s husband – William Bridges Adams – was a civil engineer. His fish-joint which made railway lines safe and allowed for express travel, was universally adopted, though he made no money from the invention.

This intriguing and stirring short work speaks of pride in her country with the music emulating a national anthem which is well suited to wartime sentiment. Thus we used this to illustrate the story of aeronautical engineer Beryl Platt whose work contributed to the victory of the Battle of Britain in WW2.

Eliza Flower and her sister, Sarah, both sang in the chapel where this piece was more than likely first performed and indeed it seems probable that they would have been 2 of the original soloists.

The score is very detailed – showing very steeply changing dynamics and tempi between phrases – it is clearly a work of an early romantic composer who is breaking away from classical norms.

There is a version of the words (just the first verse) attributed to American Prelate  A. Cleveland Coxe but it is published much later than this and seems to follow his visit to England where he may well have heard it sung.

Eliza and her sister were educated by their father at home with the help of tutors he was able to find locally in Harlow. He followed his own radical ideas about education, reflecting his political views and possibly the work of his equally radical, schoolteacher wife, Eliza Gould, who died when Eliza was only 7 years old.

There must have been a shortage of music teachers in Harlow at that time as it seems she received no music training in composition, but probably would have had piano and singing lessons – more easily available to young ladies. 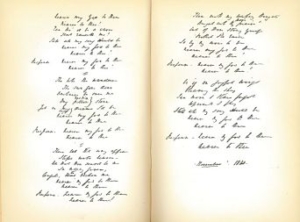 Manuscript of Nearer My God To Thee from the original draft by Sarah Flower Adams owned by Eliza Bridell-Fox, from Conway’s Centenary text, 1893

Eliza was a musical genius, wholly spontaneous, who composed from childhood. (The Monthly Record, 1952)

Her skills as a composer were channelled daily through her work at the Unitarian Chapel, so what may be her best work forms part of the Hymns and Anthems created for use by her own double choir. This important volume included the original setting of her sister’s words-  Nearer My God to Thee – which is not the music you may be familiar with. However, although the texts of the publication were sold widely it seems Eliza thought her unconventional living arrangements may have prejudiced people against using it  – as she complained to her sister –

There may have been other reasons too:- the wide range of poetic and musical authors may not have appealed to more conservative congregations; the music required professional musicians which would not always have been available; she never completed the work, and those who could have helped publicise it did little after her early death.

As well as her setting of Now Pray We for Our Country which we have recorded, she also wrote songs for the parlour and concert platform. One large work, Musical Illustrations of the Waverley Novels, was published by Novello, an indication of how highly she was regarded.

The Westminster Review said of it:

The whole history and previous character of the poor victim, … , seem all to have been vividly present to the composer’s mind… The composition is a strange and touching melange of wildness, beauty, and pathos.

The philosopher John Stuart Mill also published positive reviews of Eliza Flower’s music in his journals, and some of Eliza’s music was published in Fox’s journal, The Monthly Repository.

Arranger
Her major work Hymns and Anthems included many arrangements of work by many famous composers as well as 63 pieces of her own. She took great care to provide variety both in her choice of words and the composers who may have already been familiar to the congregation. She worked with the Music Director at the Unitarian Chapel – Collet Dobson Collet – who said of her work:-

In the selection of tunes appropriate to the words, Miss Flower was very successful, …

… setting of Mrs. Adams’s ” 0 human heart thou hast a song” to a trio from Mozart’s ” Magic Flute”, … Mary Howitt’s “The earth is thine and it thou keepest “, to an air of Hummel’s. Thus was the tedium of repetition avoided and the music always “married to immortal verse”.

Pianist & Organist
I have not found any record of her work as a pianist or organist so we must assume that this consisted of playing her own music and arrangements with the choir and perhaps to accompany herself and her sister at home.

Singer
There are some accounts of the sisters’ vocal capabilities:

They were a pair of singing birds; beautiful, intelligent, sensitive, well-read. (The Monthly Record, 1952)

In the Ethical Record in 1986 Peter Bacos wrote:

The Flower sisters were musically gifted, and were responsible for most of the music performed in the chapel. Mendelssohn was introduced to them during his tour of England and remarked on their talent.

One can only imagine how exciting such praise from the renowned composer would have been for Eliza. 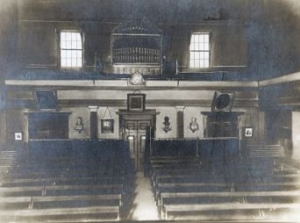 Eliza Flower took up an unconventional living arrangement with the preacher at the Unitarian Chapel – William Johnson Fox. Fox separated from his wife of 14 years, taking two of his children (Eliza and Florance ) with him to set up home with Eliza – ostensibly she was helping with his religious and political work while running the household and taking care of his children.

His lectures and Sunday addresses were prepared in full shorthand notes, and for publication were usually copied out by Eliza Flower, his devoted amanuensis.
(The Monthly Record, 1952)

Fox’s eldest son Florance was described as a deaf mute

She devoted herself especially to the afflicted son Florance, with so much success that he was enabled to obtain a place in government service and to hold it until retirement at the normal age.
(Ethical Record, 1952)

…they were like two “Flowers” on one stem, and with the death of Eliza, … Sarah literally pined away

… whose vibrations still resound to the magic call of the poetry and music, to which Sarah and Eliza gave birth, and whose beauty still echoes within the walls of their old intellectual and spiritual home at South Place. (Wallis Mansford)

The Poet Catherine Bromley, one of the many people influenced by Eliza, described her in her diary as

… a bewildering, fascinating, elusive being, the presiding genius in all the the social and musical activities of the chapel.

Eliza Flower was a strong influence on W.J. Fox and how he regarded women, treating them as equal in cultural settings though she also took a more traditional role of secretary, house keeper and surrogate mother to his children. Together they promoted the rights of women, particularly in relation to education and to the right of partners to divource if they were simply incompatible (the reason he gave for leaving his wife).

The natural inference is that the incompatibility was simply Eliza Flower. (A.S. Toms 1924)

In the South Place Magazine, published in January, 1896, this exhortation of both sister’s influence on the society in which they moved shows just how important they were:

They (and Fox) formed the centre of a most distinguished circle, which attracted to itself the choicest and most thoughtful spirits of the day. Under such influences the fine arts, the highest secular literature, the softening and more humane, because more resthetic, products of human activity were wedded to hard thinking and the austerer pursuit of religious and moral science at South Place.

The effect of this infusion of a more universal and human element was a great flowering out, expansion, and refining of the religious ideal. A truer and more complete, because better balanced, union of the Good, the Beautiful, and the True became henceforth possible.

The poet Robert Browning first met Eliza when he was 5 or 6 years old, and was highly influenced by both sisters who encouraged his work throughout his childhood. He had a strong passion for Eliza, and it is said that his poem “Pauline” is about her, and we know that he sent her letters and poems as he was growing up, though he retrieved and destroyed them all.

Browning described Flower as: “… a composer of real genius”