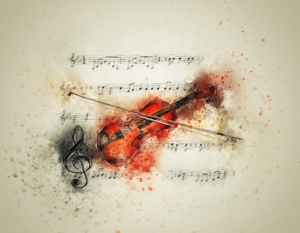 We do not know if she had any science connections – if you know of any please let us know.

She studied violin with Camillo Ritter – hailed as Scotland’s foremost teacher of violin, whose mother, Emma Ritter-Bondy, was the first female professor of a higher education institution in the UK –  appointed professor of piano in 1892 at Glasgow Athenaeum School of Music  which is now the Royal Conservatoire of Scotland.

Isobel studied singing with Michael Poutiatine and her composition studies at Edinburgh University were with Sir Donald Tovey – a composer and academic best known for his book Essays in Musical Analysis. She also studied with Dr Hans Gál, a composer who had fled the Nazi’s from his home in Vienna to live in Scotland. 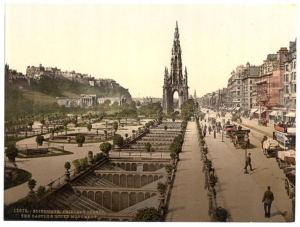 Princes Street, Edinburgh, at the time of Isobel Dunlop’s birth

In the 1930’s she taught at Westonbirt and Downham schools

She was a freelance composer whose work included Operas and String Quartets.

She played violin and sang – notably with the Saltire Singers

Her Four Settings of William Soutar was performed at the Freemason’s Hall on 1st September 1949. They were also performed at St Cecilia’s Hall on 24th and 25th August 1987, along with the work Mirror for Monarchy – Portraits of James V and his daughter Mary Queen of Scots which she wrote with Kenneth Elliott – a composer and expert on early Scottish Music

She may have also made her own watercolours and ink drawings

She offered encouragement and support to young composers, and often took more of her fair share of admin work in the performance endeavours she was part of.