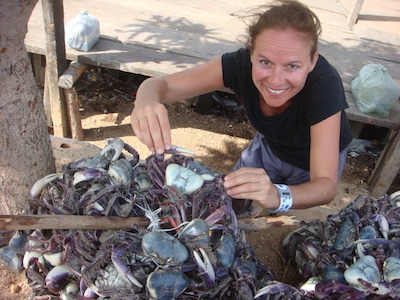 This fun sing-along song is based on the research of Dr Diele and her Brazilian colleagues from the REMAR network.  Feel free to join in!

VERSE 3
Dr. Diele loves those Mangrove Crabs Deep in the mud
She hears what their saying, she’s keeping tabs High on the cliffs
Science and Fishing have one great aim Together they can help sustain

It was created as part of an electric voice theatre Minerva Scientifica Project at Edinburgh Napier University from February – June 2017 and was first performed at the Sighthill Campus on June 20th 2017.

As a student, to earn money for travelling I have also worked as translator on International Food and Fashion Fairs, optometrist assistant, hotel maid, to name just a few.

I have uncovered the many facets of the life of the ecologically and economically important (and very tasty) Brazilian mangrove crab Ucides cordatus, caranguejo-uçá, a national icon. Have identified the linkage of the crabs’ reproduction with geophysical cycles, including the Syzygy Tide Inequality Cycle. This research has direct impact on crab fisheries management in Brazil, and the sustainability of this important fisheries resource. These crabs are the main income source for thousands of coastal, often poor and marginalized people that depend on them for their livelihoods.

Everything is unexpected – always

Seeing a woman working in mangroves, assisted by (fisher)men, has been inspiring for wives (and daughters) of fishers that I worked with in coastal Brazil. I have involved the wives into my work wherever I could, and it was great to see that they started to go to school again when they got a chance, to make a degree. Receiving an email one day from someone who grew up without running water and electricity, without much self-confidence (back then), was wonderful. The husbands however, as very much as I like them, didn’t cope very well with their modern wives. There are sad stories to be told too.