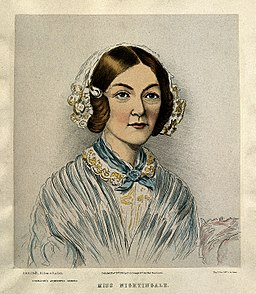 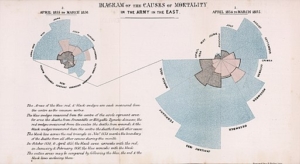 Diagram dated 1858 by Florence Nightingale of a colored pie chart to illustrate causes of death in the British Army. (Image by David Rumsey Map Collection on Wikimedia Commons)

She had a keen visual sense and invented techniques for eloquently displaying statistical information in clear diagrams.

This ballad – printed in an old newspaper – caught my eye as it seemed to sum up Nightingale’s image among ordinary people in her own time. Wives were grateful to her for looking after their husbands and soldiers thought she was an angel. However it ends with a reminder of how women were really seen at that time – despite her exalted status she is presented as a symbol of how women are “sent for the comfort of men”!

As a child, she was given a good education by her liberal father, but insisted on receiving extra tutoring in mathematics. Despite family opposition, she studied nursing and undertook 4 months of medical training in Germany at the Kaiserworth Institute. 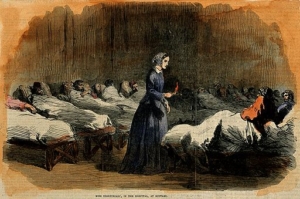 Medical Reformer
Her first job was as a supervisor at a Harley Street nursing home, but she then spent two years in the Crimean War overhauling the medical care provided for wounded soldiers, most significantly by improving hygiene.

Educator
Back in London, Florence Nightingale established several training schools for nurses, continuing even after becoming a chronic invalid. Internationally renowned, she was also widely consulted on hospital design.

Her main scientific achievements were: 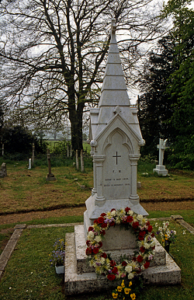 Her parents called her Florence after the city where she was born, and when she was famous it became a very popular girl’s name.

As she had requested, her family refused to let her be buried in Westminster Abbey, and her grave is in Hampshire

She was the first woman to be shown on an English banknote.

Although she insisted on scrupulous hygiene, she argued strongly against the existence of germs because she believed that diseases result from miasmas, or clouds of bad air.

She was celebrated as ‘The Lady of the Lamp’ in the Crimea after a phrase in a Times newspaper article, later popularized in a poem by Henry Wadsworth Longfellow, ‘Santa Filomena’ (1857).

On a visit to the Acropolis, Nightingale rescued an owl that was being tormented by some boys. She called her pet Athena (Greek goddess of wisdom) and kept it on her shoulder or in her pocket while she worked. ‘Poor little beastie, it was odd how much I loved you,’ she wrote when Athena died in 1854.

Florence Nightingale has become a global icon, celebrated for saving lives by introducing effective hygiene measures and making nursing a professional career. Her fame helped her to raise huge amounts of money for reforming hospitals and improving general healthcare, but she was also the author of many feminist tracts who acted as a role model by breaking traditional boundaries and working independently. Modern tributes – films, statues, books – show that she remains an inspirational figurehead all over the world, and International Nurses’ Day is celebrated on her birthday every year.