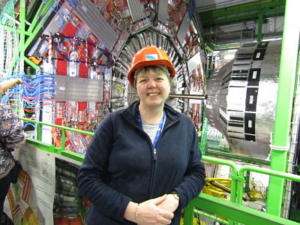 Photo of Alison taken at the CMS experiment at CERN in Geneva (All images kindly provided by Alison Dunne).

I became involved when Frances approached the Head of the Science department to see if we were interested in supporting the project. While I am interested in arts and crafts I am certainly not musical so this was an unusual opportunity to connect with local schools on a very different way than ever before.

I attended Greenwood Academy secondary school in Irvine, and my interest in Science was sparked by my Chemistry teacher. This led to me studying this science up to Honours Degree level at University, with no real idea of what I could do at the end of it!  I just knew I really liked the subject area.

After working in industry, I moved into lecturing at college where I also completed my teaching qualification.

Shop worker
I had various Saturday jobs from age 15 until I achieved full time employment. We all need money for the extras in life.

Process Engineer
My first job on leaving university. I worked in an electronics factory where I was responsible for ensuring electronic chips were produced to customer requirements. This progressed to involve project management for new equipment, expansions and new customers and resulted in a managerial role. Although in an engineering role, it did involve using my Science and problem-solving knowledge as chemicals are a large part of the manufacturing process. I was also the trainer for new Engineers and frequently did talks on Women Into Engineering at local and national level. This job also gave me opportunities to work abroad at sister plants on two occasions – San Francisco and in Malaysia

College Lecturer
Having realised that training others was something I liked to do I eventually moved into teaching at James Watt College, working for both the Science and Engineering Departments. I currently teach Chemistry, Maths and some Engineering subjects and I have no intention of leaving this great job! I have regular opportunities to meet with employers and young people to help them identify the pathway for them to achieve their goals, and to encourage young people into studying for STEM subjects and explain some of the possibilities they may not have realised were available.

I broke my arm age 39 taking ice-skating lessons and doing my Torvill and Dean impersonation. I get reminded of this at every available opportunity!

My Chemistry teacher in secondary school, Ursula Hallam, is entirely responsible for me being where and what I am now. I wasn’t special, but I had an enthusiastic teacher who encouraged me to study what I was interested in – something I still do today and try to pass on to my students and apprentices.