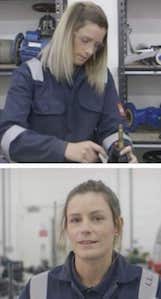 This little song is the result of the children thinking about being engineers following Louise’s visit to the school. They discussed all the kinds of engineers you could be and made lots of sounds you might make and how they might make patterns. These have been combined with a bit of electronic engineering to create sound art around a little bit of singing that tells you what kinds of engineers the children might become:

I went to primary and secondary schools in Greenock.

I had a variety of jobs including working for a number of years in a bank, and before that I was a carer. After studying Engineering at college, I then progressed into a job as an engineering apprentice with Ferguson Marine (Port Glasgow). I was the only female recruit and the first female apprentice since Ferguson Marine reopened.  Having completed my apprenticeship, I now work as a piping/ mechanical draughtswoman. I have represented Ferguson Marine at a number of events in the Scottish Parliament and my story has been used to promote engineering as a career for females

Over the 3 years of my apprenticeship I have been encouraging females into engineering such as speaking to hundreds at a seminar in Edinburgh, high schools, colleges and career days.

I’ve also featured in engineering magazines, telegraph, internet, social media, the radio, and the Alex Salmond show. All to try and encourage females.

In my free time I run, I am a member of the Harriers running club and I’m currently training to run 10k this year. I also enjoy reading.

I wouldn’t say who inspired me, but more what inspired me. I was always interested in technical subjects in school, so I knew I wanted a technical career but at school age I wasn’t sure what exactly.

When I was in school girls weren’t really pushed to do engineering subjects and none of my friends were doing it. I didn’t have enough knowledge on what options were available to me. When I was a bit older, and had my daughter I decided I wanted a secure future and to be a good role model by doing a job I loved. So, I began researching into engineering subjects at college and decided to apply for an NC engineering. It was the best decision I’ve ever made. I am now qualified as a marine draughtswoman and love having a secure future for myself and my daughter.