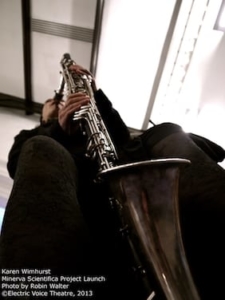 As composer in residence at Plymouth University I worked with scientist Peter Smithers and author Rebecca Stott on the chamber opera ‘Darwin and the Barnacle’.  After this show I wanted to continue the collaboration with entomologist Peter Smithers and suggested a piece about Miriam Rothschild to Frances M Lynch.  This was the first piece for Minerva Scientifica.  Following this was the commission for Eva Crane.

After writing about Darwin, I felt like writing a partner work about a woman scientist.  Consulting with entomologist Peter Smithers, I discovered the wonderful and inspiring figure of Miriam Rothschild.  Alongside her scientific achievements, she wrote and published many works…..from research through to biographies and poetry…..all this was perfect for a gradual piecing together of libretto and an operatic presentation of her life and works.   Her devotion to fleas was a perfect hook for the work and gradually, in rehearsal….it became apparent that the bass clarinet was the flea….something I hadn’t anticipated! 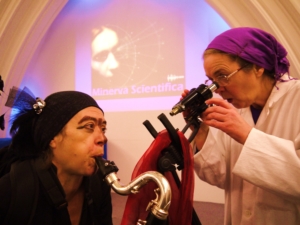 Humming, buzzing, rather baroque like ornamental lines all came together to evoke the intense experience of day by day observations of the way different bees sip from flowers.  A tiny 3 minute snapshot of Eva Crane who was the first person to take bees, and bee keeping, seriously and took her own and others people’s research onto a worldwide platform. 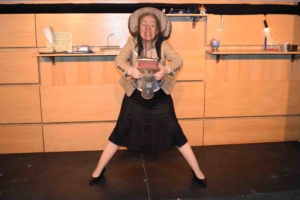 Musical Director and Theatre Composer
This is how I started out and gradually built up my craft.  These skills gradually migrated into chamber opera, performance pieces etc 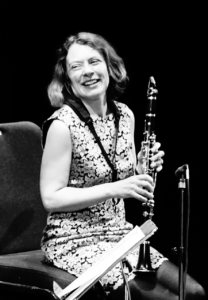 Educator
I have worked with all and sundry creating original music.  This has been from mothers and babies through to children, teenagers, adults and senior citizens.  I led the Westminster Opera Team at ENO which worked all around Westminster on opera related projects.  This is about the total joy and blossoming of people when they find they can create music.

Clarinettist
As a player, I became hooked on traditional music/jazz/classical crossovers in Edinburgh and started a band called the Cauld Blast Orchestra.  Since then I’ve played with a number of bands, dance bands, free jazz outfits etc.  Most recently with accordionist Paul Hutchinson in the Pagoda Project

Environmentalist and Campaigner
This has taken a significant amount of time in my life…..as well as having been the subject of compositions etc.

Playing for drunken celebrities in a jazz band on stilts was one of my stranger yet surprisingly lucrative jobs!

Pauline Oliveros was the first woman composer I really came across as a student.  I think she got me thinking that maybe I could try my hand at innovative music making.  In the last few years there have been many inspiring women I’ve listened to…..but back when I was young this didn’t seem to be the case!   There are too many women now to mention, but to select two:- I’d say Judith Weir (patron of Minerva Scientifica) as I’ve followed her work for many years now and Sadie Harrison as she’s a fabulous composer who happens to live in my little town in North Dorset.