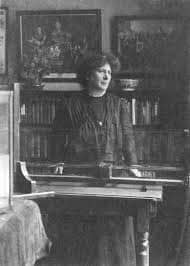 Photo by Dartemester at Girton College

Inspired by Swinburne’s poem Hertha and the earth goddess Erda, she changed her first name as a gesture of independence.

She was leader of the College Choral Society whilst at Girton College, Cambridge.

This song was written by the children with a little help from electric voice theatre as part of a project for Stroud Green Festival in June 2019. They divided into groups and wrote a verse each. One group concentrated on physics and Ayrton’s work on the electric arc, another wrote about her, and her daughter Barbara’s involvement with the suffrage movement. The third group discovered she had many important friends – including Marie Curie – and the final group wrote about her Flapper Fan which directed gas away from the trenches in World War 1.  Please join in!

Wife and mother
She married her professor from Finsbury Park Technical College, and was devoted to her husband William and daughter Barbara. Her family and her Jewish identity were very important for her.

Activist
She campaigned for suffrage and was closely associated with the militant Emmeline Pankhurst.

Inventor
Her inventions included a sphygmometer (for recording a pulse at the wrist) that she designed while she was still a student, and a flapper fan for clearing noxious air from trenches during WW1. Although that was largely ignored, her machine for dividing lines into equal lengths was well-regarded.

Her major scientific specialisation was electricity. The book that she wrote, The electric arc (1902), used experimental observations to test and construct theories. She indicated the important practical applications her research implied for preventing flickering in electric street lights.

Her work on carbon in searchlight projectors was attributed to her husband, because she completed it under his name while he was terminally ill. After he died, a London professor complained that if only she had ‘put him into carpet-slippers when he came home, fed him well and led him not to worry…he would have lived a longer and a happier life and done far more effective work.’ 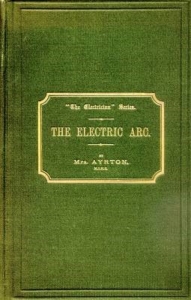 She was a close friend of Marie Curie, and looked after her in England when she was very depressed because of a scandal in Paris about her love life (by then Curie was a widow, but the man involved was married with several children – no prizes for guessing who got blamed).  Ayrton taught Maths to her daughter Irène, who persuaded Curie to  sign a suffrage petition – the only one she ever agreed to.

She was a role model for aspiring women at the time, and continues to be so.

She told a journalist: ‘I do not agree with sex being brought into science at all. The idea of ‘women and science’ is completely irrelevant. Either a woman is a good scientist, or she is not.’

That is still an ideal worth aiming for.