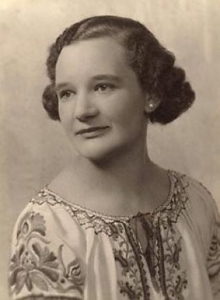 Entry by Frances M Lynch with many thanks to Stephen Bourne for his support in finding information and photographs. His biography of Avril Coleridge-Taylor appears in the Oxford Dictionary of National Biography.

The podcast features interviews with four of the nurses and midwives who arrived in Essex many years ago from the Caribbean – Tina Aparicia, Carol Sydney, Lenore Sykes and Nell Green. The Avril Coleridge-Taylor song below (The Rustling of Grass) felt like a reflection of how these women talked about their homes far away and long ago….

This episode was first released on the 1st July 2020 to celebrate the foundation of the International Council of Nurses which was first proposed by Ethel Gordon Fenwick on 1st July 1899.

There are no known connections with science.

electric voice theatre · The Rustling of Grass by Avril Coleridge-Taylor 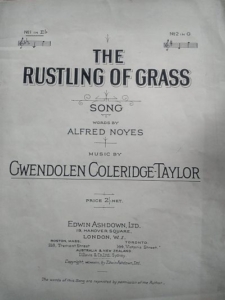 This song turned out to be useful not just for the Windrush Medicine Podcast above but seemed fitting as a song which could have been sung by Gulielma Lister from her home in Leytonstone as she thought of her days spent at Lyme Regis as a child with her family, out every day sketching, collecting and observing the flora and fauna.

“I cannot tell why,
But the rustling of grass,
As the summer winds pass thro’ the fields where I lie,
Brings to life a lost day,
Long ago,
Far away,
When in childhood I lay,
Looking up at the sky, and the white clouds that pass,
Trailing isles of grey shadow across the gold grass,
O, the dreams that drift by,
With the slow flowing years, hopes, memories, tears
In the rustling of grass.”

Avril lived in Croydon so almost certainly went to a local school before winning a scholarship in 1915 to attend Trinity College of Music, London (now Trinity Laban Conservatoire of Music and Dance) when she was 13 years old.  She studied with Gordon Jacob and Alec Rowley.

“Quite early in life I began to feel a sense of music within me that was anxious to make its way out. Not only did I want to write music—as I had seen my father do—but to express myself through beautiful sound.”

Conductor
Her work as a conductor seems to have been very high profile. Anyone who makes their début at the Royal Albert Hall – which she did in 1933 – must have a strong measure of talent.  She went on to conduct her father’s famous work Hiawatha there several times.

Composer
Coleridge-Taylor wrote almost 100 compositions during her long life including nearly 40 songs of which we have managed to record just one so far!

Her orchestral works included the piano concerto in F minor, the Golden Wedding Ballet Suite, and Wyndore and Historical Episode for chorus and orchestra. In 1957 she wrote a Ceremonial March in celebration of Ghana’s independence.

One of her orchestral works – Sussex Landscape – was revived by the Chineke! Orchestra at the Queen Elizabeth Hall, London, on 22 April 2019.

Pianist
In almost every mention of Coleridge-Taylor’s life and work people say that she was a famous pianist (as well as conductor and composer), however, I have so far found no details of her work as pianist though I would assume she performed her own piano concerto and other works, possibly her songs. When lockdown is over I hope to be able to read her own accounts which are currently not available online – then I‘ll fill you in!

There must have been many musical highlights – as for most composers hearing your works performed is always a highlight – but I imagine that her début as a conductor at the Royal Albert Hall would have been a tremendous experience for her.

When she was 12 years old she had her first song published – “Goodbye Butterfly” which is a fantastic achievement for anyone – never mind for someone who experienced discrimination throughout her life.

“….she considered herself an Englishwoman, not coloured. At first [she] did not take on her African ancestry, but her experience in South Africa brought it home to her. It surprised her. In the music world [she] was discriminated against more as a coloured woman than as a woman.

Avril Coleridge-Taylor is a complex character who appears to have made the most of what she had despite coming up against many barriers, as son Nigel commmented: –

“She felt keenly that she ought to take her place among the greatest. But the people in the classical music profession disadvantaged her because of what she was.”

The more I discover about this composer, and the more I see her scores and sing her music, the more I agree that her work deserves to placed higher in our musical canon.