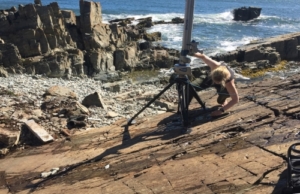 I was invited to be a guest on this podcast to discuss the life and work of Maria Ogilvie Gordon with Catherine Booth – Science Historian and retired Science Curator, National Library of Scotland. The conversation is woven into the music of HELEN HOPEKIRK (you can hear the whole song below) and FRANCES M LYNCH, who is also the presenter. You can hear more podcast episodes from the series here.

I love listening to music and though I don’t play any instruments myself, my son plays the cello, and I really enjoyed the mathematical nature of music theory at school.

electric voice theatre · The Voice Of The Mountains By Helen Hopekirk

Title: The Voice of the Mountains
Composer: HELEN HOPEKIRK
Words by: Barclay Ritchie
Written in: 1913, Obertraun, Austria
For: Voice and Piano
Performed by: Frances M Lynch

This is the song used in the podcast above about MARIA OGILVIE GORDON. Hopekirk was her contemporary, and like Gordon, came from Scotland, was a pianist, and achieved a place at the top of her profession. Gordon worked in the Mountains of Italy – the picture shows a View of the Dolomites where most of her work was carried out. (Image by Alex J White (CC BY-NC 2.0)). It seems that Hopekirk wrote this particular song while touring in Austria around the same time, and not so far away from the same mountains! 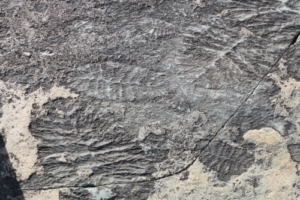 My background is unusually mathematical for a palaeontologist. My BSc was in Physics, followed by an MSc in Theoretical Physics (2001 and 2002 both at Imperial College, London). I then completed an MPhil in mathematics at the University of York in 2005, with my research working on the quantization of “toy” models of General Relativity. I then changed research fields, completing my MRes in ecology at the University of St. Andrews. It was during this MRes that I became interested in the mechanisms of ecosystem structure, focussing my PhD on the ecosystems of the first macroscopic organisms, submitting my PhD Ediacaran palaeoecology in 2013 at the University of Cambridge. 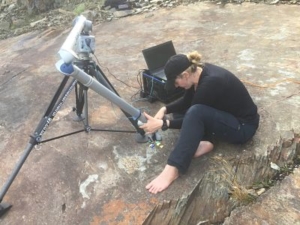 Emily at work (Photo by Will McMahon)

Maths tutor/teacher
2000 – 2017 I taught maths from school to masters level, specialising in helping scientists without a mathematical background get the mathematical knowledge to do the analyses they needed.

Palaeontologist
2008 onwards, because understanding the evolution of early animals is fascinating! 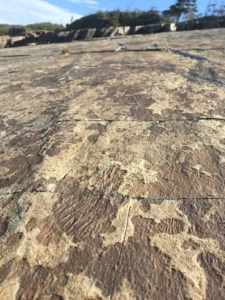 My research investigates the role of ecological processes on evolution through deep-time, from the first animal communities of the Ediacaran to the present. My interdisciplinary approach is shaped by my PhD in Palaeobiology, coupled with Master’s Degrees in ecology, physics and mathematics.  My innovative research program, imports novel field-based laser-scanning techniques from aerospace and combines approaches from disciplines such as forest ecology and neutral networks, to address previously intractable questions about early animal life.

I once had a fantastic experience abseiling down the side of a steep slope in order to get a unique view of the fossils in the rock.

On another occasion I had a more alarming experience. I was doing some field work on a coastal site and had a week’s worth of data from the fossils I had been scanning collected on my laptop. I was packing up my equipment at the end of the day and I’d placed my laptop in its protective case at the top of the bedding plane I was working on. It seemed very stable but 5 minutes later the laptop and its case just zoomed straight into the sea!

As luck would have it, the tide was turning which meant that it didn’t get washed out to sea and we managed to fish it out. The case had not only floated, but kept everything water-tight so all my data was saved. Just as well – a week’s worth of data would have been horrendous to reproduce.