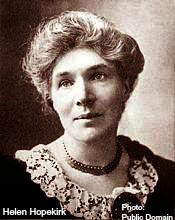 Hopekirk had little connection with the sciences per se.  But she loved nature, frequently hiked the mountains of Austria and New England states, and regularly contributed to conservancy organizations such as the Audubon Society.  She also was keenly interested in religion (especially Theosophy and Christian Science) and the poetry and literature of Fiona Macleod (aka William Sharp) and other Celtic Revival writers.

Hopekirk was another emigrant from Scotland who settled in Boston in 1897 about 20 years after Williamina Fleming. It is just possible that one of Mina’s many outings to the theatre might have included a concert given by this famous pianist! The song itself is about a mother singing to her child about it’s missing father – an echo from Flemings own life.

Muriel Robertson is known for her work on the tsetse fly and the parasite it carries, Trypanosoma gambiense, which causes sleeping sickness. This rich harmonic lullaby written for a choir of women’s voices represents the sleep that would elude victims of this deadly disease at night and afflict them by day. Both scientist and composer traveled the world in pursuit of their careers, but although Hopekirk loved  visiting Scotland she never settled there again. 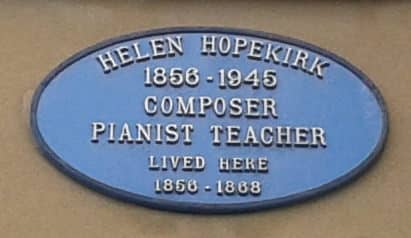 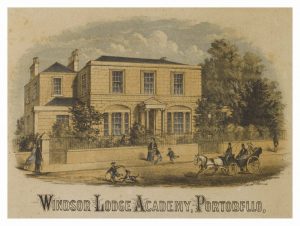 Helen received her early education at Windsor Lodge Academy, Portobello, where she played in public for the first time in July, 1868, aged 12.
In her teens she attended the Edinburgh Institution for the Education of Young Ladies in Charlotte Square.

Hopekirk was fortunate to have parents who strongly supported her desire for a career in music.  Fulfilling her father’s dying wish, she went to Leipzig, Germany to study piano at the Konservatorium (1876-1879), where she also managed to take a few lessons in composition, even though female students were generally discouraged from composing.  Only one of her student compositions survives – a one-page, 34 bar piano piece with no title!

From the mid- to late 1880’s, she worked in Vienna with Theodor Leschetizky, who became the single greatest influence on her playing and teaching, from which she exclusively earned her living.
Her husband, William A. Wilson, an Edinburgh businessman, managed the early years of her performing career.  But when Wilson was injured in a traffic accident in London in January 1897, Hopekirk knew that she had to become the primary breadwinner of their household.  They relocated to Boston where Hopekirk began teaching piano at New England Conservatory.  Finding institutional teaching not to her liking, she left the Conservatory in 1901 and thereafter taught privately in her home in Brookline, Massachusetts.
In addition, she participated in Boston’s busy music scene as an active solo and chamber musician.

Hopekirk was a staunch supporter of womens’ suffrage. Women over the age of 30 gained the right to vote in Scotland in February 1918, but American women had to march and petition their congressmen for another year and a half before the U.S. Congress passed the 19th Amendment to the Constitution. Hopekirk proudly rode in an open car driven by her younger composer friend Mabel Wheeler Daniels in a massive Suffrage Parade in Boston on 15 June 1915.

Hopekirk labored under the prejudices against professional women musicians that were common in the late 19th and early 20th centuries. She admitted to a female journalist from the Dundee Advertiser that  “…when her violin sonata was performed in Boston the critics . . . dissected it with unnecessary elaboration, dwelling on details which in the case of a man’s work would never have been discussed at all.”

By surmounting professional belittlement, she became a model for other professional women musicians in the Boston area, including Amy Beach, Mabel Wheeler Daniels, and Margaret Ruthven Lang.