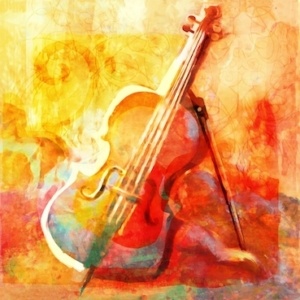 Details of this very private composer are hard to come by – we are still looking, so if you can help do contact us.  So far, we’ve found no connections with science in her life. However, she is now connected through Minerva Scientifica as we have found her beautiful songs fruitful, particularly for wildlife references, but are considering using many more in the future.

Birds in those branches did sing,
Blackbird and throstle and linnet,

Laura Florence did a particular study of the food of birds, trying to find out which species helped and which hindered farmers and their crops. This gorgeous song struck me as mentioning three of the birds she looked at and the giant cherry tree outside my own London home has always been home to song birds, pecking away at the cherries which gave me the idea of using this song inside a larger work I created about this scientist and her childhood friend Doris Mackinnon.

This arrangement of a very well-known rhyme was not easy to decipher from the manuscript – it looked as if it was written for something that was not a formal performance. I was able to find out nothing else about it. However, it seemed to connect well to Somerville, as a song about Maries, by Marie Dare, around Mary Queen of Scots and of course is a text that was collected obsessively by Somerville’s friend Sir Walter Scott – he collected 8 versions of it.

Dare was born in Fife as were the two intrepid ornithologists who collaborated most of their working lives. This beautiful setting of Shelley’s poem could be one of the birds they wrote about after a bombardment by a Zepplin on the River Forth which they noted a good many effects on the bird populations quite far from the attack. It also resonates with Baxter’s six year mourning period after Rintoul died.

This is the first, and only, recording, but hopefully a choir will sing it again one day – the “good ladies” would definitely approve!

Marie Dare studied cello at the Guildhall School of Music in London, and then with Paul Bazelaire in Paris. She studied composition with Benjamin Dale. 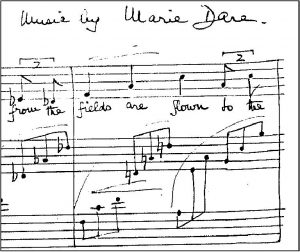 She wrote 6 compositions for cello quartet, a most unusual combination, of which only one was published – Elegie (Chester Music). Most of her scores are in the archive of the Scottish Music Centre.

She is usually described as very shy, though clearly she was much loved. Her music reveals a different side of her character – passionate and colourful.