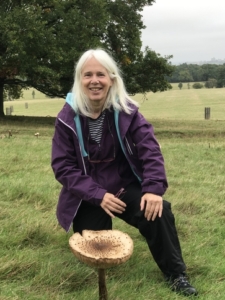 I collaborate with an artist who is now fascinated by fungal biology and the interactions of fungi with other organisms. I have also advised several artists on various aspects of fungal lives.

This is a polyphonic acapella chant which is part of the electric voice theatre‘s  Voices for the Future – Beatrix Potter project. It examines the ideas behind fungi as the basis for life on this planet and an important part of the struggle to save the planet. This was only made possible thanks to public funding from the National Lottery through Arts Council England and grants from the Granada Foundation and Fungus Day. 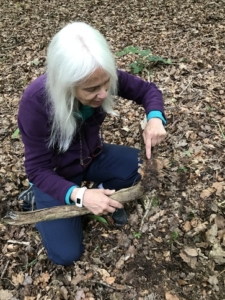 As a child I was always interested in science and the natural world. While at junior school I told people that when I grew up I wanted to be a scientist or a teacher, and have been lucky enough to do both at the same time. I did a combined honours degree in Biology and Mathematical Statistics at the University of Exeter. The course focused on ecology, and I was interested in any and every aspect of ecology. I was the lucky enough to get a position working on the Ecology of wood decomposition at Queen Mary College London, and then had a post doc fellowship at Bath investigating fungal communities in attached oak branches.

As a student I had jobs delivering post at Christmas, and I worked in a shop and office, and several factories, as well as fruit picking.

After my post doc I went to Cardiff, where I have taught, written extensively, and studied many aspects of wood decay fungi and the relationship between fungi and trees.

I have taught thousands of students about the importance and fascinating nature of fungi. I have revealed much about how basidiomycete fungal communities develop in wood, how they search for food, how they compete with each other, how their mycelia operate as networks and how global change is affecting them – but, as ever, my work has posed far more questions than it has answered.

I am a 4th dan black belt in karate.

Marie Curie – she was determined to be a scientist despite huge obstacles.