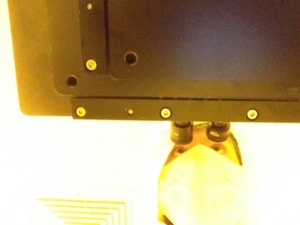 I have played guitar for several years though never pursued music beyond taking the GCSE. I found it much more challenging than the STEM subjects, but it has given me an appreciation of what is involved in creating a piece of music and what the participants of this project have achieved.

This is a suite of 3 pieces in which each composer designed their own fantasy quantum material, combining chemical elements and layering them experimentally. They used the atomic and atomic mass numbers associated with each element to create melodies.

Quantum materials have very unusual behaviour. Thin films structures, only a few atoms thick, can be grown layer by layer by firing atoms at a substrate. Some of these materials are superconductors, which mean they transmit electricity with no loss of power.

When creating this piece, I choose various elements, created a small repetitive melody for each and built them on top of each other to create my own quantum material.

I selected three elements which are Helium, Magnesium and Neptunium.

My piece of music was created by taking four elements and making melodies from there mass number and atomic number. I eventually layered these up to create a sense of a chemical reaction. I hoped to convey a material which would advance medical technology and with the use of moscovium radiation, help to get rid of harmful illnesses.

I went to my local comprehensive school in Cumbria, where I stayed on at sixth form to take A-levels in German, Maths and Physics, with AS-Levels in Further Maths and Biology. I had a year out before going to Durham University to commence my physics studies. I graduated in 2018 with an integrated masters (MPhys). I then moved to Scotland to commence my PhD in condensed matter physics at the University of St Andrews.

I undertook a summer internship part way through my degree at Lancaster University, developing computer simulations in particle physics. While I decided particle physics was not for me, the positive experience of working in a research environment assured my that my next step after graduating should be a PhD in Physics.

Adjusting a valve on the cryostat (image by Craig Topping)

I am in the first year of my PhD in condensed matter physics and still in the preliminary stages of doing research. I am part of the Condensed Matter Doctoral Training Centre (CM-CDT), which means I study graduate level courses and engage in teaching activities alongside my main research project. I joined the Rost Lab for Quantum Materials Research and I am working on measuring the electrical and heat properties of unusual materials. These are thin films, only a few atoms thick, and can be grown layer by layer by firing atoms at a substrate.

I am a keen triathlete and mountain biker. When I get stuck on a physics problem it’s more likely I’ll solve the puzzle while swimming lengths in the pool than staring at a piece of paper.

A woman who had a very successful and inspiring scientific career was Mildred Dresselhaus. She wrote her PhD thesis on superconductivity and afterwards contributed to many areas of physics, most notably with her work on graphite and for developing measurement techniques using lasers.