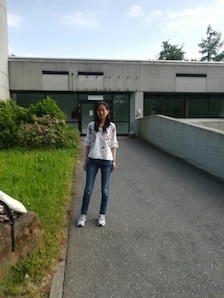 This photo was shot at the Max Planck Institute for Astronomy in Germany, where I had a working visit and started to work on galaxy orbits.

I was involved in the Shine Event which combines science and art and deliver to the public. The project was organized by my supervisor and I was encouraged to join. I took part in the Explorathon-Shine Event on 29/09/18 in Dundee, and the Shine Opera on 25/10/18 in St Andrews.

This is a suite of 4 pieces based on studies made by Meng Yang. Galaxy morphology is about the shapes of each galaxy and the temperatures of the way each spiral orbits and how they move in space.

“I was really glad to hear four pieces of music made from my own work! I was amazed at their imagination. Scientists can explain various morphologies of galaxies with simple and clear ideas of orbits, which I think is the charm of science.” Meng Yang

“The song was so touching and I was deeply touched!” Meng Yang

I started by looking at the research and creating lyrics that worked well with it.  This became the chorus for my song. I then looked at some poems about galaxies to get some ideas for lyrics for the verses.  The chords used are repetitive to make it sound like the spirals of the galaxies.  The extra voices used create an echo-like style of space. A L

Stars orbit around the centre of the galaxy, orbits can be cold, warm or hot. My idea was based on the warm orbit. My idea started with playing notes and making them spiral with different branches to try and create the image of a warm orbit.

I took the way each spiral orbits and used it to change the speed of each section of music. I then took the different shapes of each type of galaxy and I put each orbit speed to a specific galaxy section.

I took inspiration from the three different spirals: – cold, warm and hot. I used these to create the music by making sections in for each spiral. I decided to make the cold cello to make it seem slower and darker, then I made warm and hot violins to show that it’s getting faster and higher to make the different sections more defined.

I am a PhD student working on galaxy dynamics. I make use of the motion of stars and gas in galaxies to study galaxy properties, such as the dark matter distribution.

I am a volunteer at the mobile Planetarium show. We introduce the projected night sky to the public, especially school kids. It is both challenging and interesting to communicate with kids.

My supervisors, Anne-Marie Weijmans and Vivienne Wild, showed good examples of being successful woman researchers and provided me with useful suggestions. My collaborator Ling Zhu also encouraged me to build my confidence in science.