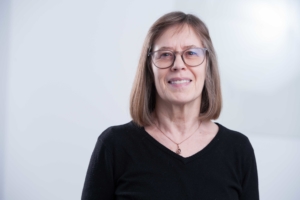 I became involved in the Rosalind Franklin celebration project – the Franklin Effect- with women composers, and scientists from KCL, which started around 2013. I was asked how KCL might celebrate such an event, and Rosalind Franklin was an obvious star scientist from KCL, who many think was not credited enough for her contribution to understanding the helix shape of DNA.

I also play the piano, not well, and sing in a choir.

I was paired with Cheryl Frances- Hoad, a wonderful composer. As a psychologist, I suggested that the words spoken by Watson in 1953, when he first saw the crystallography photograph 51, taken by Ray Gosling, Rosalind Franklin’s PhD student, might become the basis of the musical piece.

‘The instant I saw the picture, my mouth fell open and my pulse began to race…’

The video above is a taster of “The Franklin Effect” which includes Photo 51, part of a major work by four composers mentored by Judith Weir  (Master of the Queen’s Music), developed with four scientists at Kings College, London and four singers from electric voice theatre in 2015.

I went to Haberdashers’ Aske’s girls school, then in Ealing, where I was rather surprisingly made head girl. I then went to Bristol University, one of the few universities at that time doing just a psychology degree, not a combined one (I did not want to cut up animals).

Then I did my clinical training at Birmingham University, for 2 years, and took a job as a clinician at an old mental hospital, Clifton Hospital, in York – now a housing estate.

From there, I realised I wanted to find out how and why psychological therapies might work, or not, and took at post at the Medical Research Council at the then Institute of Psychiatry, in Camberwell, South London. While there, I took the opportunity to complete my PhD, (while also having 3 children), working on a project I designed to offer family intervention to those with psychosis.

Despite not knowing what I wanted to do while growing up, once I took a degree in psychology and then an MSc in clinical psychology, I knew I wanted to continue in this area, and work in mental health.

I did not know initially that I wanted to work with people with psychosis, then the most serious and neglected group of psychiatric patients, seen as ‘unamenable’ to talking therapies. However, once I did start working with them, they were the most interesting people and it seemed an area where, at the very least, one might find out whether or not talking therapies could help, which they do. Initially, we talked to the patients and their families, developing and evaluating family work for psychosis, and then later, developed and evaluated individual cognitive behavioural therapy for psychosis.

I think my main scientific achievement to date is to have used evidence based medicine to show that people with psychosis and their families could be helped by talking therapies, and that even the most severely disturbed individuals could be engaged in therapy, did not just  need to rely on medication alone. This work, with others, particularly in the UK, was important, as for the first time, we could show that those with the most serious mental health problems were not ‘beyond the reach’ of talking therapy. We showed that their problems were understandable in the context of what had happened to them, and were not just biological problems, that could not be talked about.

The impact of this work has been to have psychological therapies, both family work for psychosis and cognitive behavioural work for psychosis, as recommended interventions in the NHS and in many other health systems.  I was appointed to chair a NICE guideline group for schizophrenia, and for psychosis and schizophrenia, in 2009, and 2014, where these therapies were both endorsed. This work has helped begin to change society’s view of those with severe mental health problems, as not actually being different from the rest of society, just with a different set of difficulties.

Another achievement was to help improve the work life balance for women scientists in my institution, by chairing and co-chairing an Athena Swan committee and helping the Institute of Psychiatry, Psychology and Neuroscience to obtain a Silver award in 2014, which was  renewed in 2020. As a working mother, and a single parent of 3 teenagers at one stage, I was able to demonstrate that it was possible to do both, and that there is life for women scientists in academia after birth.

I now have 9 grandchildren, 7 of mine and 2 step grandchildren. It is an unexpected joy at this time of life to be a granny.

Marie Curie was amazing, and Florence Nightingale also invented the pie chart, which I find a very nice piece of information.

There were no senior women in my field, clinical psychology, when I was training. It has been great to help to change this. What is encouraging now is to come across many experts on the radio or TV who are women, and no one is surprised.

The latest randomised controlled trial that our research group has just completed, led by Professor Philippa Garety, my colleague and friend for many years, is called SlowMo.