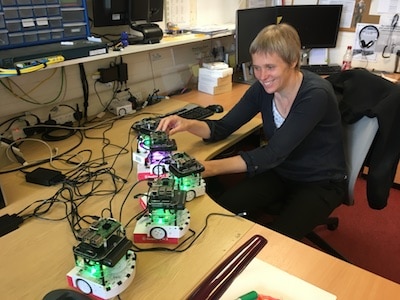 Editor-in-Chief of the Journal of Evolutionary Computation (MIT Press)

Emma has BA(Hons) in Chemistry from Oxford University, and an MSc and PhD in Artificial Intelligence from the University of Edinburgh

Emma was one of the pioneers in the field of Artificial Immune Systems – taking ideas from the way in which the natural immune system works to develop computer programs that work in a similar way to the immune system to solve a range of difficult problems, such as pattern classification, anomaly detection, prediction, and optimisation of processes.

Emma plays the violin and fiddle and is a member of the Really Terrible Orchestra in Edinburgh!

As a teenager in the early 1980s when the first home computers were becoming available, Emma first became interested in computing and taught herself some basic computer programming at home. Following school, she went to Oxford University to study Chemistry. Here she gradually realised that lab-based chemistry was not for her, and in her final year, turned back to computing and developed a program that modelled the solubility of various gases in blood at different pressures, with applications to deep-sea diving. Inspired by this, after graduating she went on to the University of Edinburgh to study for an MSc in Artificial Intelligence, where she was introduced to the concept of bio-inspired computing – looking at biological systems such as evolution and swarms of insects to design computer programs to solve difficult problems. She obtained a PhD that investigated whether processes observed in the human immune system could be used to inspire the development of computer programs that could tackle problems as diverse as finding patterns in large streams of data, and scheduling operations in a manufacturing process in a factory! She is now a Professor at Edinburgh Napier University where she teaches courses in Artificial Intelligence and continues to do research. Her current work takes inspirations from natural evolution, immunology and swarms of insects to develop computer systems that learn over time, adapting to new situations and becoming better at solving problems as they get experience. The work is applied in a number of fields including swarm robotics and optimisation – helping to route vehicles more efficiently to minimise carbon emissions, schedule workers and processes in factories, and optimising cutting patterns in forests to minimise the effects of wind-damage to trees.