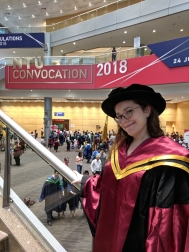 I have always been a big fan of music, though I was never any good at producing it myself. I dabbled in playing piano, drums and bass guitar, though I am not proficient at any of those today.

This music is about how Kristin uses maths to study light. The vocals are sampled from the scientists and the only other sound is from Natalia’s double bass.
The image shows a diagram under the microscope with photons reflecting in between. The bass represents the mirror, and the vocals are the photons.

By using photons and polaritons Luke created a fun and exciting piece for you to listen to. You will hear his clarinet representing the polariton being created as this image shows, with a small gong and the voice of the scientist – Kristin 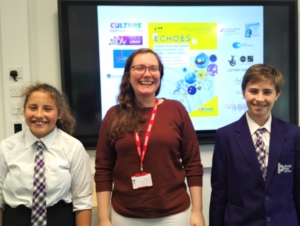 I have been interested in maths and science since I was a kid, so no one was surprised that I ended up being a scientist. After competing in a physics Olympiad after high school, I went on to get an undergraduate degree in Physics in my local university. After that I was convinced I wanted to become a researcher. I got my MSc in Stockholm and went across the world to do a PhD in Singapore. Now I am working as a researcher in the University of St Andrews.

Physicist
I guess it depends on one’s definition when I became a proper physicist. I worked as a research assistant over the summers as an undergraduate student, then became slightly more of a physicist working as a PhD student. Now I keep get paid to continue learning about things that fascinate me. I can’t complain.

Tutor
I have done a lot of tutoring in different forms throughout the years. Everything from one-on-one math help for elementary school kids, being a teaching assistant in undergraduate courses, to teaching an intense workshop for high school exams with a private company. I always enjoy helping people understand things better!

Record store clerk
Before I started getting paid to do physics, I needed to make money in a more traditional way. I was very lucky to get a job at a record store in Iceland as a student. It was a great environment, and really helped broaden my music tastes. 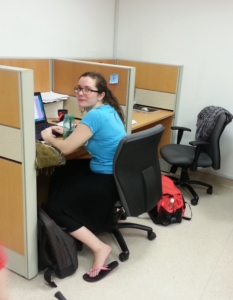 Kristin at work in Singapore

Most of my work has been about describing polaritons, which are hybrid light-matter quasiparticles. They can form when you optically active material (material that can absorb and then re-emit light) inside a microcavity (made by putting two mirrors very close to each other). The light is then confined in a small region, where it gets absorbed and emitted multiple times. The distinction between what is light and what are excitations in the material gets blurry, and it becomes easier to describe the whole system as a new particle that is a mixture of the excitations and the light, inheriting aspects of both.

When I was a teenager, I took part in a fashion competition with a couple of my best friends. It was a school competition on a national level about making an outfit based on a specific theme. We took part twice, both times making quite extravagant impractical dresses, once winning and the other time getting 2nd place. It was a lot of fun designing the dresses and then figuring out how we could achieve our vision on quite a tight budget.

If I must choose one, I will have to say Emmy Noether. She was a brilliant mathematician and Noether’s theorem is one of the most important theorems in physics, which proofs that any continuous symmetry leads to a conservation law. Being born in late 19th century, she faced a lot of obstacles getting education and recognition because of her gender. However, her genius was certainly recognised by others – Einstein said of her:

“Yesterday I received from Miss Noether a very interesting paper on invariants. I’m impressed that such things can be understood in such a general way. The old guard at Göttingen should take some lessons from Miss Noether! She seems to know her stuff.” 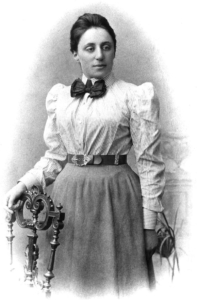