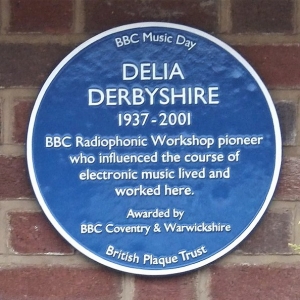 There is no composer I can think of who most fulfills the brief of Minerva Scientifica than Delia Derbyshire. Her work with electronic music was pioneering to say the least; her love of mathematics and the inspiration she drew from the natural world all testify to her as a true icon of Science and Arts in tandem.

When the UK went into Lockdown in March 2020, electric voice theatre lost the opportunity to play Music by Delia Derbyshire at the Brixworth Music Festival, due to take place on 15th May.  Fortunately we were able to continue our work with the festival online and began a programme of events on 8th May – You can find the full programme here.

Derbyshire is most known for her realisation of Ron Graingers theme tune for the Doctor Who series but her huge portfolio of work shows an extraordinary relationship to sound and the natural world. She wrote music, not just for TV, but for film and theatre and performed in live events.

Here are just a couple of short science-based examples:

Time On Our Hands

You will find many more examples on YOUTUBE and her music is still available on CDs. 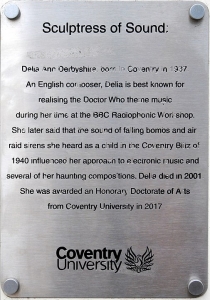 Derbyshire was a keen musician from an early age. She went to the local grammar school in Coventry and went on to Cambridge to study Maths and music. She also attained an LRAM – an external professional diploma from the Royal Academy of music which she took as a pianist.

Delia was looking for work in electronic music at a time when it was a new discipline dominated by men (DECCA turned her down) So she went through a number of occupations while searching for a way in – she taught, worked for the UN, for Boosey & Hawkes the music publishers and so on until she became a

Her 1963 realisation of the Doctor Who theme tune was used for 17 years. It is undoubtedly her most famous work – though at the time she wasn’t allowed to be credited.

She worked with many prominent musicians and artists including Lucian Berio, Yoko Ono and Peter Hall.

She lived in Northampton for the last 21 years of her life. During this time she stopped producing work publicly and took local jobs – a bookshop, art gallery…

She had begun to work on music again not long before she died.

Delia Derbyshire is inspiring to anyone interested in science and/or music – a musician obsessed with sound and technology – undoubtedly ahead of her time who overcame discrimination to carve her own, unique sound world that has inspired many and will continue to do so through the Delia Derbyshire Day charity