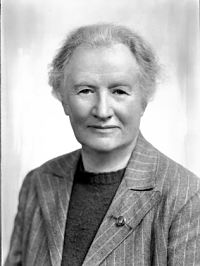 Image kindly provided by, and reproduced with permission of, the Scottish Ornithologists’ Club (https://www.the-soc.org.uk)

Together with Evelyn Baxter she collected woven baskets and encouraged traditional Scottish crafts.

She took a great interest in the history of her local village, Largo, and wrote a book about it.

While with a group of Fife women in Somerset in 1918, undertaking training for agricultural work, Leonora Rintoul was one of the performers at a concert they organised. She gave a recitation in Scots which received great applause.

This short song gives a brief glimpse of the very rich lives of Rintoul and her fellow ornithologist, Evelyn Baxter. With the Isle of May, where they did much of their important work, at the centre of the musical material, it branches out to explore their many interests and exploits across Scotland.

Dare was born in Fife as were the two intrepid ornithologists. This beautiful setting of Shelley’s poem could be one of those birds they wrote about after a bombardment by Zepplin on the Forth from which they noted a good many effects to the bird populations quite far from the attack. We made this recording using only 3 singers, but hopefully a choir will sing it again one day – the “good ladies” would definitely approve!

Private education in her childhood, and no further formal education thereafter 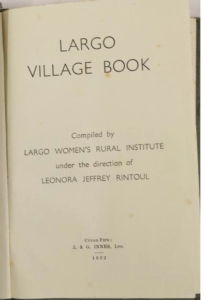 Tramped around most parts of Scotland studying birds with her lifelong friend and fellow ornithologist, Evelyn Baxter.

Her book about the history of her local area, Largo village book (1932) was well researched. A small section tells the story of Alexander Selkirk, who fled the town in 1695 following an assault on his brother.  He was said to be Defoe’s inspiration for Robinson Crusoe

Because of the need for agricultural labour during WW1, Leonora Rintoul was one of the Fife women who worked on the land planting potatoes and tending gardens.  She also spent time in a camp in Somerset learning all the necessary skills to harvest flax, an industry prominent in Fife at the time

Leonora Rintoul, along with Evelyn Baxter and others, founded the Largo Women’s Rural Institute in 1918, and was prominent in that body for many years 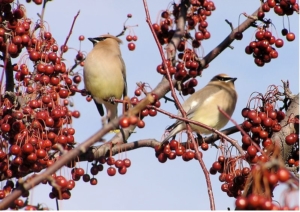 Following collaborative research and observations, she and Evelyn Baxter produced the authoritative 2 volume work: Birds of Scotland : their History, Distribution and Migration (1953).  The updated version of this work, in two large highly illustrated volumes published in 2007, extensively cites Rintoul and Baxter’s research data.

The two women made frequent visits between 1907-1933 to the Isle of May, and made meticulous records of the birdlife. These included rare migrants and wind and weather data, making their research a unique record of that region to this day.

Various attempts were made during the 1920s and 1930s to introduce legislation to protect wild birds. Ornithologists themselves did not agree on how legislation should be framed. On one side was the Royal Society for the Protection of Birds, and on the other Scottish bird lovers including Leonora Rintoul and Evelyn Baxter. Rintoul and Baxter believed that the proposed legislation at the time would do more harm than good – that it would protect more aggressive species to the detriment of weaker and scarcer birds. Leonora Rintoul expressed these opinions strongly in letters to newspapers.  Debate on the terms oflegislation continued for many years until the Protection of Birds Act was finally passed in 1954. 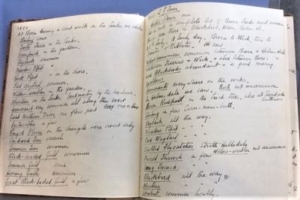 Rintoul’s Journal: “July 1938 At Brora during a short walk on the links we saw…” (Credit: Archive of Scottish Ornithologists’ Club)

In March 1936, both Leonora Rintoul and Evelyn Baxter were at a meeting of keen birdwatchers who decided to set up a club which would promote “the systematic recording and study of birds”.  This was the Scottish Ornithologists’ Club (SOC). Both women were Joint Presidents until 1948, then Honorary Presidents. The SOC now has a membership in the thousands, and continues to flourish.

Both Leonora Rintoul and Evelyn Baxter kept detailed journals of their travels and observations, and sometimes took photographs of the birds’ nests they discovered. These are retained in their archives held at the Scottish Ornithologists’ Club headquarters near Aberlady, East Lothian, and it is possible to make an appointment to view them. 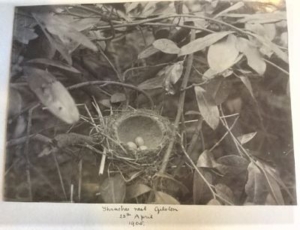 Thrush Nest taken by either Rintoul or Baxter in Fife 1905 (Credit: Archive of Scottish Ornithologists’ Club)

Although they travelled round Scotland extensively themselves, Leonora Rintoul and Evelyn Baxter also looked to others to help them collect data on birds from different parts of Scotland.  Nowadays we would be putting messages on Twitter; they sent letters to newspapers like the Scotsman, asking people to send them details on particular birds they may have observed. Examples included requests for information for a census of herons in February 1928, and on sightings of waxwings in November 1946 during an immigration of these birds. Records suggest that women in particular often responded to these requests, and subsequently signed up to be bird recorders.

Both Rintoul and Baxter were always very encouraging and supportive to anyone new to bird observation. Their publications continued to instruct in ornithology long after their deaths.