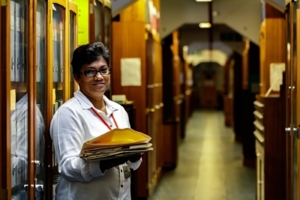 An electric voice theatre “Echoes from Essex” Podcast. The Queen of Slime Mould is Gulielma Lister (1860-1949), Leytonstone’s World Expert on Fungi, and an inspiration to Gothamie Weerakoon who is in discussion with science historian Dr Patricia Fara. For more Minerva Scientifica podcasts click here.

My artistic connection is with this project.

This little quasi folk song is a mini potted history of The Queen of Slime Mould, Gulielma Lister.

I have a bachelor’s degree in biology and a MSc in Environmental Sciences. My PhD is on Lichenology.

I have done postdoctoral studies on Lichen taxonomy.

Dog walker
When I needed money, and because I love dogs…

Research Scientist on Lichen taxonomy
My research interests are focused on the taxonomy and ecology of tropical lichens, bioindication and conservation of lichenised fungi in endangered habitats.

Senior Curator of Lichens and Slime Moulds at the Natural History Museum, London
My main responsibility as the Senior Curator of British, General and Historical herbaria is to manage and develop one of the world’s largest lichen collections and slime moulds with approximately 450,000 specimens.

I have spent much time in the field in South and South East Asia observing lichens in their native habitats and described more than 100 new lichen species.

1) A taxonomic key for Graphis, the most specious lichen genus in Sri Lanka

2) IUCN red listing of threatened lichens in the world

5) Documentation of the lichen flora of Sri Lanka and describing novel species.

I have been privileged to visit many countries and to work with many colleagues overseas.

I am a very good cook. My family and friends love my creative dishes. However, do not ask for recipes. I create the dishes using what is available in the kitchen!

I am involved with many women in science education and outreach projects. Especially focusing on women in underdeveloped countries in Asia and Africa. I have done public lectures and conducted workshops on popular science among women.