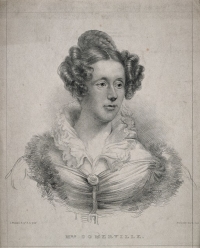 As a girl, Mary Somerville had both painting and piano lessons.  Her landscape paintings decorated the walls of the family home, and were admired by visitors.  One visitor commented: “I am glad that Miss Fairfax has any kind of talent that may enable her to win her bread, for everyone knows she will not have a sixpence.”  Although she continued to paint, especially in watercolours, Mary herself had no illusions about her artistic ability. She admired the work of others, however, and frequently visited the studio of J. M. W. Turner where she much appreciated his watercolours.

Aberdour is just a hop, skip and jump from Somerville’s home in Burntisland. The children re-imagined what her life there would have been like when she was the same age as them. Science researcher, Catherine Booth gave a talk about Mary to the children and they chose places they knew themselves, where Mary may have gone to observe the natural world – the Sea Shore, Bin Hill, The Links and the Harbour.

She had more freedom than most middle class children of her age and roamed around the coastline and countrysides collecting shells and fossils, investigating the world.

We are grateful to Ian Archibald at Burntisland Heritage Trust who helped us find all the locations and provided some wonderful insights into Mary’s childhood.

Frances M Lynch provided the chorus while the children split into groups and wrote a verse each! The song has proved so popular that it has been sung in all our following shows by primary schoo children who simply love it. We use a shorter version now, to fit it into the show – but you will find all of the original words on this pdf.

This song has nothing to do with Mary Somerville  – unless you take into account the 8 versions of it collected by her friend Sir Walter Scott. It has more to do with it’s composer, Marie Dare, and even more to do with Mary Queen of Scots. Just like the Queen, Somerville was proud of her appearance: “not-withstanding my love of science I like to be admired and dressed to look well”

Living at a time when the education of women was not encouraged, Mary Somerville was mainly self-educated. Being a curious child she determined to learn through reading and conversation and persisted with mathematics despite her father thinking it was bad for a girl’s health!
For one year, she was sent to a school run by Miss Primrose in Musselburgh where she learned accomplishments for young ladies, such as French, Italian, music, drawing and dancing, but where she was also forced to wear a metal support to keep her shoulders back.

Self-educator
Following her first marriage to Samuel Greig, Mary Somerville continued her mathematical studies, although these were much disapproved of by her husband.  After Greig’s death three years later, she pursued her studies openly, and continued this all her life. Her second husband, Dr William Somerville, was very supportive, encouraging and taking pride in her learning.  He even copied out some of her manuscripts to save her time!

Mathematician, Astronomer and Physicist
Having read a number of key French mathematical, physical and astronomical texts recommended by the Professor of Mathematics at Edinburgh University, Mary Somerville became very knowledgeable, and confirmed her level of ability by scientific writing, and in discussions and correspondence with eminent scholars and scientists.

Mary Somerville’s Mechanism of the Heavens was introduced into the Cambridge University curriculum – the first scientific textbook written by a woman to be used in a British university.
Her name was given to Somerville College, Oxford.
By means of her engaging scientific writing, this remarkable woman helped many people to understand the science of her day. She was a public figure – would have been a celebrity in today’s culture – and her prominence showed that women were capable of pursuing intellectual careers.