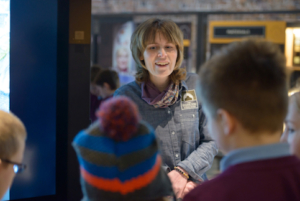 I played for many years as a tenor drummer in various pipe bands based in and around Glasgow – lots of great summer weekends spent travelling to competitions across both Scotland and the UK. After retiring from the band scene, I ‘crossed to the other side’ and started to learn to play the bagpipes!

I came to be involved with ‘Scottish Superwomen of Science – Minerva Scientifica’ after electric voice theatre and Historic Environment Scotland agreed to work together on a project based around the home of the Conservation Science team at the Engine Shed in Stirling, Scotland’s dedicated building conservation centre, which opened in 2017.

The children visited us at the Engine Shed to learn about the history of the building and the conservation science which now takes place within its walls. The composers started with how it was built, what kind of things it was used for, how it decayed and how Historic Environment Scotland brought it back to life.

Riverside Primary – where I gave a talk –  concentrated on the decay of the building, investigating the processes of decay in the natural world (eg. water & salt), the destruction by people  (eg. vandalism) and how they came to abandon the Engine Shed leaving it derelict before the final restoration.

Frances M Lynch also wrote a piece entitled “Salt Tears” based on the same story and techniques. For more information go to the MAUREEN YOUNG page.

My main interests at school were Art, Geography and Chemistry. I left school after 6th year, and went on to university to study Geology – I only took this as an ‘extra’ subject in 1st year, but enjoyed it so much that I decided to make this my degree subject. Despite working as an engineering geologist after graduating, I had always hoped to go into teaching at some point. As the entrance qualifications to teaching were about to change, I realised that this may be my only chance and gave up my job to retrain as a secondary school teacher. I then spent 16 very happy years teaching geography and a little bit of chemistry. During this time, I decided to return to university, to take a part-time Masters degree in Architectural Conservation. This combined my interest in built heritage, developed through conservation projects my Dad worked on in the family blacksmithing business, and in stone as a building material. Following an internship with Historic Environment Scotland, I now have a job where I’m able to combine all of my previous training and experience! 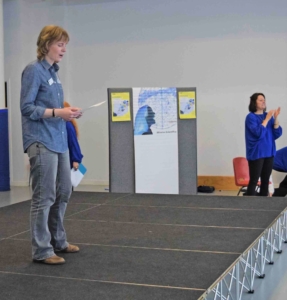 Sarah gives her talk to the whole school at Riverside Primary

Conservation Scientist
I joined Historic Environment Scotland in 2015, initially as an intern. We undertake analysis of traditional building materials, and investigate and monitor issues such as dampness or decay of a building material. We also deliver outreach activities for everyone from primary school children to other building professionals.

Secondary School teacher
I taught Geography and a little bit of Chemistry for 16 years, mainly at Johnstone High School in Renfrewshire. A hugely enjoyable job, and a privilege to do, but a job that comes with incredible amounts of work that need to be done outside the classroom! Please appreciate your teachers!

Engineering Geologist
After graduating (the first time!), I worked as a Junior Engineering Geologist with a company of geotechnical, environmental and mining consultants. My role involved helping to carry out site investigation work looking at how suitable the soils and ground beneath a site would be for new buildings. A great introduction to carrying out fieldwork, report writing and working both independently and as part of a team.

Admin Assistant
During school/university holidays and after graduating, I worked in the office with my family business, where my dad was a blacksmith and my mum was the company secretary. I answered the phones, dealt with the mail, typed letters and undertook some basic accounting tasks, and it taught me the importance of putting care and attention in to your work and the part everyone plays in running a small business. 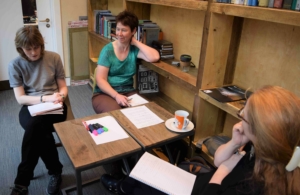 While completing my Masters degree in Architectural Conservation, I had the opportunity to work on two projects with the Building Stones team at the British Geological Survey in Edinburgh. The first looked at the requirements for replacement stone and trained stonemasons to carry out building conservation work in Glasgow over the next 20 years, and the second was a study of original paving materials and paving patterns in the New Town of Edinburgh. Both projects were the first of their kind, and were great examples of raising awareness of the need for maintaining the skills needed to repair our traditional buildings, ensuring that suitable stone is being quarried for this work and the importance of the entire streetscape in our view of historic towns and cities.

I vividly remember first hearing the fascinating story of Florence Nightingale’s work to record the causes of death of soldiers in military hospitals during the Crimean War. Working as a volunteer nurse, she realised that many more of the soldiers were dying of preventable diseases, such as cholera, typhoid and dysentery, than were dying of their wounds. As well as working to improve living conditions for the wounded soldiers, she kept meticulous records of causes of death, and on her return to Britain, presented this data in the form of what we now refer to as polar diagrams, to highlight the need for improved hospital conditions. A novel but simple and visual method of illustrating her data, and the impact that her sanitary reforms had on the mortality rates of the soldiers under her care. 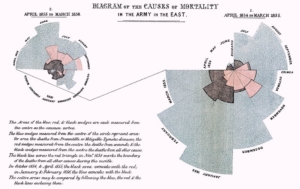