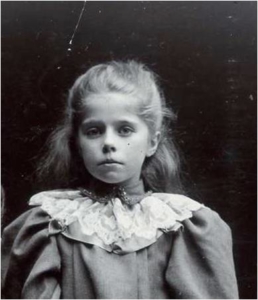 Image (Courtesy of Catherine Booth) is of a young girl, Marion Jack, who lived in Scotland around the same time as Laura Florence.  We do not know what Laura Florence looked like.

“Laura & Doris” is a sing-along song for children developed during workshops at Clovenstone Primary School in Edinburgh in 2017. It is based on the imagined early life of Laura Florence and her next door neighbour in Aberdeen , Zoologist Doris Mackinnon, The enthusiasm of the children is catching – so do join in!

It includes a full – if interrupted – performance of   “The Three Cherry Trees” by Marie Dare for voice and piano, and extracts from Nairne’s “Oh! Rowan Tree!”, Burns’“To a Louse”,  Beethoven’s “Für Elise” and “We Shall ne-er meet again” by Liza Honeyman. The Nursery Rhyme “Lavender’s Blue” is used as an important theme. 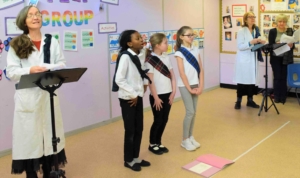 She graduated first MA (1907), then BSc (1909) from Aberdeen University, having been awarded various prizes and certificates in the course of her study.  She was then awarded a Carnegie Research Scholarship from Aberdeen.  In 1914, she went to the USA, and graduated MA from Stanford University, California studying entomology, then in 1920, she gained a PhD from Cornell University, New York.

During her Carnegie Research Scholarship, she undertook a major study of the Food of Birds, analysing the food eaten by nearly 100 different species.  Her aim was to show the relationship between bird life and agriculture – which birds benefitted crops, and which destroyed them.
Her PhD thesis researched pig lice, and as well as studying the lice themselves, she also included a comparison with human lice.
She became Associate Professor of Bacteriology at New York Medical College in 1927, and Professor in 1942.

Her published research on the Food of Birds provided data which had not been collected before, and was of great interest to the agricultural, as well as the scientific community.  It is still used as primary data in modern studies on birds.
Much of the research she carried out throughout her life involved parasites and bacterial infections in farm animals, so had practical application.  Several of her papers are still cited by scientists working in similar fields today.

While doing her analysis of the food of birds, Laura Florence advertised in the newspaper for people to post to her specimens of dead birds, so that she could examine the contents of the stomachs, intestines and crops. She sent out special bags for the purpose, and paid the return postage. Although she settled permanently in the USA, Laura Florence maintained her connections with Scotland all her life, and loved receiving a bag of Scottish lavender to remind her of home.

As a child, Laura Florence lived at No. 10, Queen’s Road, Aberdeen, next door to the home of the Mackinnon family.  Doris Mackinnon, the eldest child, was very close in age to Laura Florence, and also became a Professor in a Zoology discipline.

We do not know much about her personal influence during her life, but she has certainly  influenced the children of Clovenstone Primary school who learned about her life, her science and her love of music during our Minerva Scientifica Project.